Marcela Riddick emerged from the water in a wetsuit and scuba mask, shouting excitedly. She had just completed her first ever scuba dive, in Big Fisherman’s Cove outside the USC Wrigley Marine Science Center on Catalina Island.

“I absolutely lost it — in the best way — coming out of the water. I was screaming at everybody that I was a fish,” says Riddick, who recently graduated from the USC Marshall School of Business with a Master of Science in Social Entrepreneurship degree and who is building a career in environmental education.

Despite growing up on the beaches of Southern California, she’d never had the chance to dive before due to the high cost of lessons and equipment. The lack of diversity among the diving community also deterred her.

The Wrigley Institute for Environmental Studies, headquartered at the USC Dornsife College of Letters, Arts and Sciences, recently hosted the Wrigley Institute Scientific Diving Discovery Program to help people like Riddick learn how to scuba dive. The program aims to diversify the field of scientific diving, which is overwhelmingly male and white.

“Scuba diving can be a gateway to scientific careers, ocean conservation, love and deeper connection with and stewardship for the environment. We want to open those doors to as many people as possible,” says Jessica Dutton, associate director for research and engagement at the USC Wrigley Institute. 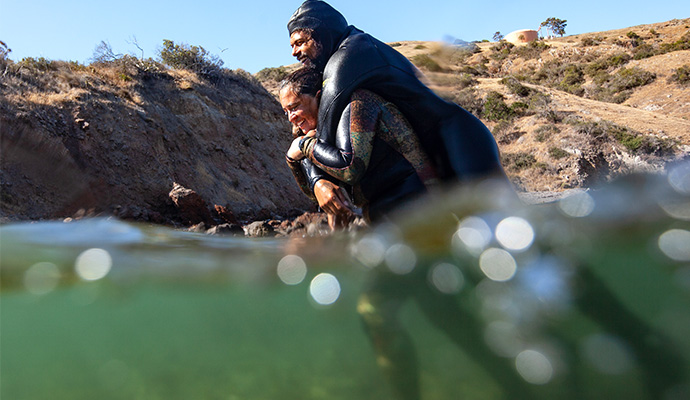 Divers traverse a first aid course, which takes place both on land and in the water, as part of their training.

The program began with support from an Ocean Exploration Education Mini-Grant from the National Marine Sanctuary Foundation. Dutton and John Heidelberg, director of the USC Wrigley Marine Science Center and associate professor of biological sciences, applied for a grant to train students from underrepresented minority groups how to scuba dive, at no cost.

Their vision was a course that would get students directly into the workforce. “We thought, ‘Okay, what training does someone need so they can get a job as a scientific diver straight out of our program?’ explains Hanna Reed, diving safety officer at the USC Wrigley Institute. Reed helped organize the program and instructed the students, along with Kory Lambert, chair of the Next Generation Committee for the National Association of Black Divers, who also earned his certification as a dive master while assisting with this course.

After securing the funding, Dutton, Heidelberg and Reed launched an application process that brought in seven undergraduate students from across the country.

In July, the students spent three weeks at the USC Wrigley Marine Science Center where they dove in progressively deeper water and trained in skills such as underwater data collection, first aid, knot tying and operating small boats. At night, they studied for certifications including the AAUS Scientific Diver certification and the NAUI Advanced Scuba Diver certification.

They also attended lectures on subjects like fish identification and heard from scientists from different backgrounds, including Diane Kim, adjunct assistant professor (teaching) of environmental studies, who spoke about her experience as a Korean American woman working in science and her innovative kelp research.

Riddick says these lectures helped illuminate what they were seeing on their dives.

On her deepest excursion, some 65 feet, Riddick spotted a giant shovelnose guitar fish, a species she could identify thanks to a vertebrate identification class led by David Ginsburg, professor (teaching) of environmental studies. 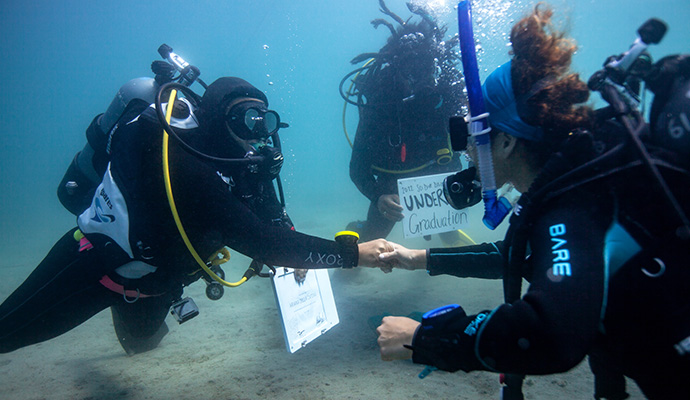 An underwater graduation ceremony capped off the program.

Reed says the program offers a tangible career boost for students; there are a surprising number of jobs available to those with diving certifications, from environmental consulting to marine archeology to work with aquariums.

Reed arranged lectures by Octavio Avila, director of USC Dornsife Career Pathways, and his team who walked participants through the options available to them.

“The goal for the program was for participants to see that there was room in the diving community for all different backgrounds, to see what researchers do every day and hopefully get them comfortable with the idea of ​​graduate school or careers in science,” says Reed .

USC Wrigley is hoping to expand this program next year, to a total of 16 participants, if they can locate another round of funding.

Beyond employment prospects, the program also helped students build a network of like-minded colleagues. Riddick feels she’s made genuine connections with her fellow participants, with talk of a reunion diving trip in Miami.

“I’m now part of a global community of people who know how to breathe underwater,” says Riddick.

Americans are concerned that student loan forgiveness will worsen inflation