California is preparing for a third straight year of drought, and officials are tightening limits on water use to levels never seen so early in the water year. Most of the state’s water reservoirs are well below average, with several at less than a third of their capacity. The outlook for rain and snow this winter, when most of the state’s annual precipitation arrives, isn’t promising.

Especially worrying is the outlook for the Sierra Nevada, the long mountain chain that runs through the eastern part of the state. California’s cities and its farms – which grow over a third of the nation’s vegetables and two-thirds of its fruit and nuts – rely on runoff from the mountains’ snowpack for water.

As an engineer, I have studied California’s water and climate for over 30 years. A closer look at California’s water resources shows the challenge ahead and how climate change is putting the state’s water supply and agriculture at greater risk.

Where California gets its water

Statewide, California averages about 2 feet of precipitation per year, about two-thirds of the global average, giving the state as a whole a semi-arid climate.

The majority of California’s rain and snow falls in the mountains, primarily in winter and spring. But agriculture and coastal cities need that water to get through the dry summers. To get water to dry Southern California and help with flood control in the north, California over the past century developed a statewide system of reservoirs, tunnels and canals that bring water from the mountains. The largest of those projects, the State Water Project, delivers water from the higher-precipitation northern Sierra to the southern half of the state.

A section of the California Aqueduct within the State Water Project. Ken James/California Department of Water Resources

To track where the water goes, it’s useful to look at the volume in acre-feet. California is about 100 million acres in area, so at 2 feet per year, its annual precipitation averages about 200 million acre-feet.

Of that 200, an average of only about 80 million acre-feet heads downstream. Much of the water returns to the atmosphere through evapotranspiration by plants and trees in the Sierra Nevada or North Coast forests. Of the 80 million acre-feet that does run off, about half remains in the aquatic environment, such as rivers flowing to the ocean. That leaves about 41 million acre-feet for downstream use. About 80% of that goes for agriculture and 20% for urban uses.

In wet years, there may be much more than 80 million acre-feet of water available, but in dry years, it can be much less.

In 2020, for example, California’s precipitation was less than two-thirds of average, and the State Water Project delivered only 5% of the contracted amounts. The state’s other main aqueduct systems that move water around the state also severely reduced their supplies.

The 2021 water year, which ended Sept. 30, was one of the three driest on record for the Sierra Nevada. Precipitation was about 44% of average. With limited precipitation as of December 2021 and the state in extreme droughtthe State Water Project cut its preliminary allocations for water agencies to 0% for 2022, with small amounts still flowing for health and safety needs.

While conditions could improve if more storms come in the next three months, the official National Oceanic and Atmospheric Administration outlook points to below-normal precipitation being more likely than above normal. 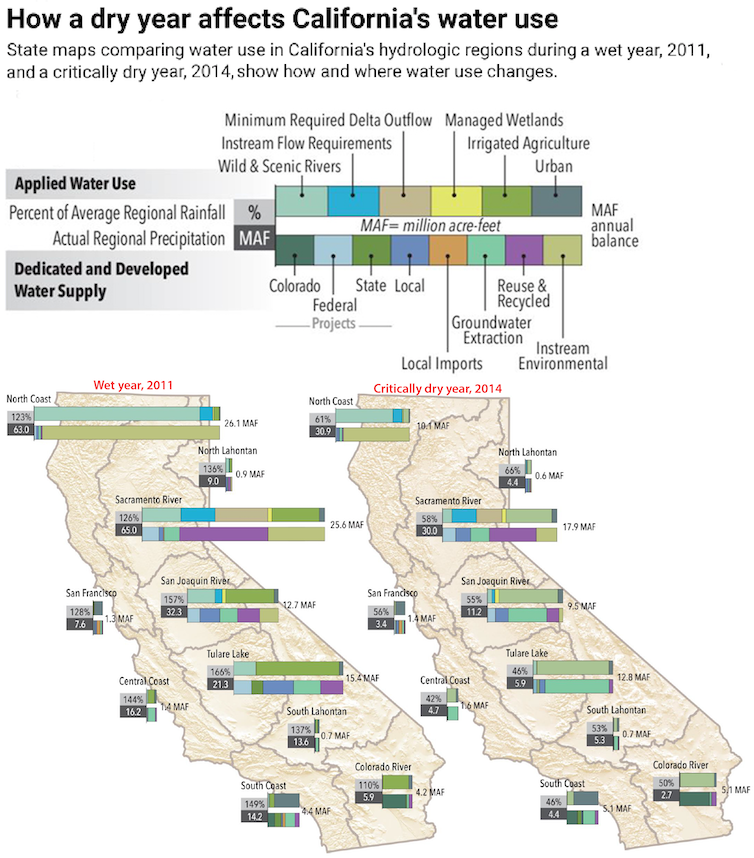 Drought and a warming climate

Multiyear dry periods, when annual precipitation is below average, are a feature of California’s climate, but rising global temperatures are also having an impact.

Over the past 1,100 years, there has been at least one dry period lasting four years or longer each century. There have been two in the past 35 years – 1987-92 and 2012-15. A warmer climate intensifies the effect of these dry periods, as drier soil and drier air stress both natural vegetation and crops.

Over 80% of the runoff in the central and southern Sierra Nevada comes from the snow zone. In the wetter but lower-elevation northern Sierra, rainfall contributes over one-third of the annual runoff.

The average snowline, the elevation above which most precipitation is snow, goes from about 5,000 feet elevation in the north to 7,000 feet in the south. On average, each 1.8 degrees Fahrenheit (1 Celsius) of warming could push the snowline another 500 feet higher, reducing the snow total.

Shifts from snow to rain and earlier runoff also mean that more of the capacity behind existing dams will be allocated to flood control, further reducing their capacity for seasonal water-supply storage. 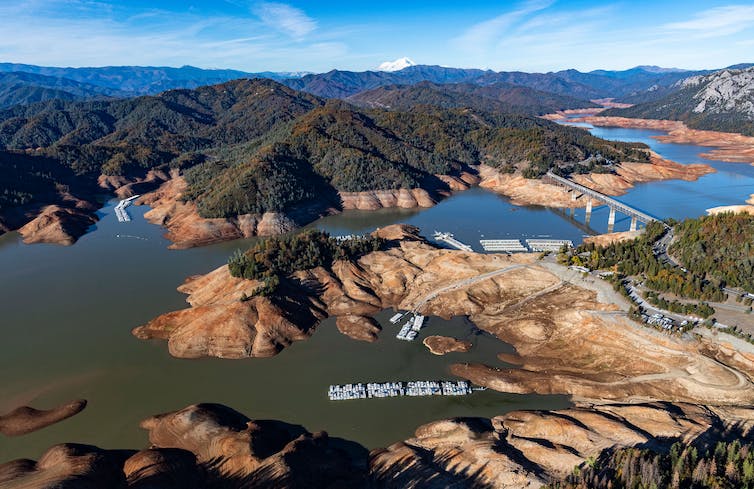 A wealth of research has established that the Sierra Nevada could see low- to no-snow winters for years at a time by the late 2040s if greenhouse gas emissions don’t decline, with conditions worsening beyond that possible.

Sustainability in a warming climate

Communities and farms can pump more groundwater when supplies are low, but the state has been pumping out more water than it replenished in wet years. Parts of the state rely on water from the Colorado River, whose dams provide for several years of water storage, but the basin lacks the runoff to fill the dams.

Public opposition has made it difficult to build new dams, so better use of groundwater for both seasonal and multiyear storage is crucial. 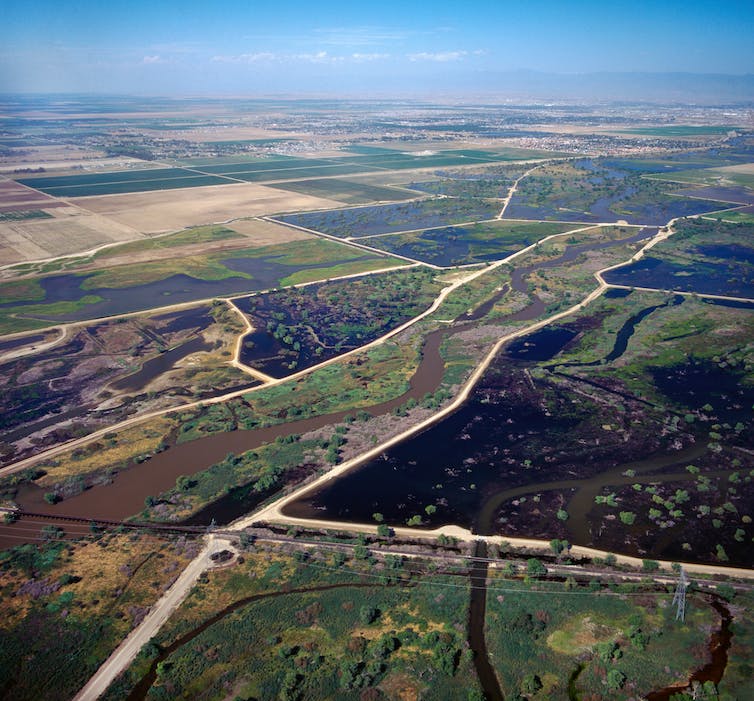 The state’s Sustainable Groundwater Management Act requires local agencies to develop sustainability plans. That provides some hope that groundwater pumping and replenishment can be brought into balance, most likely by leaving some cropland unplanted. Managed aquifer recharge south of the Sacramento-San Joaquin Delta is gradually expanding, and much more can be done.

If the state doesn’t do more, including tactics such as applying desalination technology to make saltwater usable, urban areas can expect the 25% cuts in water use put in place during the 2012-15 drought to be more common and potentially even deeper.

California’s water resources can provide for a healthy environment, robust economy and sustainable agricultural use. Achieving this will require upgrading both natural infrastructure – headwaters forests, floodplains and groundwater recharge in agricultural areas – and built infrastructure, such as canals, spillways and levees. The information is available; officials now have to follow through.

‘Queen Elizabeth always seemed happy and at peace in the garden’

Tiger births and Benin Bronzes: Restorations of nature and art