Yesterday, Secretary Deb Haaland’s Chief of Staff killed off any hope of a negotiated settlement of pending claims against the Trump administration for financial misconduct, environmental depredation, and violation of tribal sovereignty and fishing rights in California’s Trinity River. Even though the Trinity River has sustained the Hupa People since time immemorial.

For over a year, the Hoopa Valley Tribal Council made repeated and urgent written requests to meet with the Secretary to settle litigation the Tribe filed in August 2020 against Secretary Haaland’s predecessor, David Bernhardt. All requests went unanswered. “That changed yesterday when Secretary Haaland’s Chief of Staff, Rachael Taylor, broke her silence and told us that “unfortunately, the Secretary is unable to meet on this matter,” said Michael Orcutt, Fisheries Director for the Hoopa Valley Tribe. Orcutt said, “It was a slap in the face.” 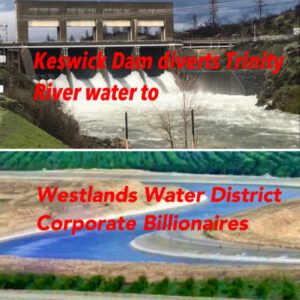 “I am really disappointed,” said Hoopa Valley Tribal Chairman, Joe Davis. “We had such high hopes for Secretary Haaland because she knows the lives of Native people. With her words, she honors Indian Country’s rights and traditions as well as Native peoples’ commitment to environmental justice. But Reclamation has diminished her policies and with it our fishery and our sovereignty.”

The Secretary and her own appointees have not stepped in to remedy Reclamation’s manipulations, evasions, and rejections of congressional mandates to repair the damage to California’s environment, including the Trinity River, caused by decades of unlawful operation of California’s Massive Central Valley Project.

So, yesterday, the Hoopa Valley Tribe notified a federal court in California that its year-long negotiations with the Biden Administration to settle the Tribe’s 2020 suit against the Trump administration had reached an impasse.

“We return to court knowing that our tribal existence is at stake,” said Vice Chairman Everett Colegrove, Jr. “Our ancestors saw what the near extinction of the buffalo did to the Indian tribes on the Great Plains.” “We know that the loss of our salmon will be just as catastrophic for the Hupa people,” Colegrove added.

“That knowledge is our secret weapon,” said Tribal Council Member Darcy Miller. We know we have no other place to go. We will have to use the courts to fight for our homeland and fishery until the end.”

“As a Tsumehstl:on Xo’osday who grew up fishing to meet our traditions of feeding the community, my message to the Bureau of Reclamation and those who are acting with them to destroy our rights is simple- -Shame on you,” said Tribal Council Member Jill Sherman-Warne.

The Hoopa Valley Tribe’s homeland and fishery on the Trinity River in California’s Klamath River Basin are at stake in the dispute.

The dams on the Trinity River generate electricity and irrigate arid lands in the Central Valley, including the Westlands Water District, and a sprawling desert the size of Rhode Island. The District includes land that the Bureau of Reclamation and the State of California have known for more than a half-century could not be practically irrigated because it has no surface water and poorly drained soils with high concentrations of naturally occurring toxins.

In the decades since, the use of Trinity water to irrigate Westlands and elsewhere in the Central Valley has leached toxins, poisoned land, polluted water, and genetically deformed Pacific Flyway wildfowl. Meanwhile, Reclamation’s Central Valley Project contractors have reaped billions from federal subsidies and profiteering associated with the Trinity’s irrigation and power development.

By 1992, galvanized by the shocking environmental destruction and urged by numerous interests seeking environmental justice and fiscal responsibility, including the Hoopa Valley Tribe, Congress passed the Central Valley Project Improvement Act. Over the objections of Project contractors, Congress made environmental restoration a formal purpose of the Central Valley Project, on par with water and power development. It specified environmental restoration activities and made the Project contractors pay for it as a cost of doing business. The CVPIA imposed an explicit trust responsibility on the Bureau of Reclamation for restoration of the Tribe’s fishery resources. The CVPIA also required revision of all Project contracts to reflect this change in the federal law. For decades, Westlands and other contractors waged a prolonged, but for the most part losing war against the CVPIA, including legal opposition to the restoration of the Tribe’s Trinity River fishery.

This is where the Trump administration comes in. Of all the candidates President Trump could have chosen to be Secretary of the Interior, he selected Westlands’ long-time attorney, David Bernhardt. In his tenure, Secretary Bernhardt did three things. First, he instructed the Bureau of Reclamation to engage in fraudulent federal cost accounting that, if unchecked by the Biden Administration, is anticipated to — as described in the Westlands Water District’s report to the Office of Management and Budget, “reduce costs for its power and water contractors and their ratepayers by an average of $400,000,000 for program implementation to date”—which means that that sum and many times that in the future will either be paid

by taxpayers or not at all. Hoopa documented that fraud and submitted its evidence to the Department, the Office of Management and Budget, and Congress over the past two months.

Second, perhaps concerned that he might need a hedge against the potential failure of his accounting scheme, Secretary Bernhardt ordered a set of memoranda from the Bureau of Reclamation, the Fish and Wildlife Service, and the Solicitor’s Office to conclude, against all facts and law , that the CVPIA’s environmental restoration, including Trinity River fishery restoration, was complete so that certain restoration costs to the contractors could be further reduced. Secretary Bernhardt signed off on that conclusion on January 19, 2021, days before the transition in administration.

Third, Secretary Bernhardt ordered the approval of new water contracts for Westlands and others that violated numerous cost and environmental protection provisions established in the CVPIA and other federal laws, including essential protections for Hoopa’s fishery.

Hoopa sued the Trump Administration about all of this; the case is in a California federal court. In March, the Court asked the Biden Administration whether it wanted to remain Hoopa’s adversary in this case. The Administration had to make up its mind by May 12, 2021. The government rejected the court’s invitation to change position and stand with its trust beneficiary against the predatory CVP contractors.

The Palisade Plunge opened amid wide fanfare, but now, its makers are urging people to be cautious — and bring enough water — in the summer heat