Attempts to reduce the amount of waste flowing into the ocean from Indonesia are having limited success.

The UN has called marine plastic pollution “a slow-motion catastrophe,” and a recent study found Indonesia to be the second largest contributor to it after China. Overconsumption of single-use plastic and bad waste management are largely to blame.

Indonesia has some of the most biodiverse and important coral reef systems in the world. But, over the past few decades, those habitats have faced a number of challenges, including plastic contamination.

According to the UN, around 8 million tons of plastic are dumped into the ocean every year. Indonesia contributes more than 600,000 tons of that, estimates the Indonesian Institute of Sciences.

The Covid-19 pandemic has only made things worse. Discarded masks and other protective gear have added around much more waste to the country’s leaking waste-management system.

The coasts of Indonesia are home to many densely populated communities. Plastic waste is ubiquitous and transboundary, with ocean currents Transporting it in multiple directions including to uninhabited islands.

In 2017, Indonesia committed to reduce marine plastic debris up to 70 percent by 2025 in a national action plan. The government issued new legislation on waste management in 2018. Two years later, it banned single-use plastic in mini-markets. But the policy is not as strict in traditional markets where plastic bags are still widely used. 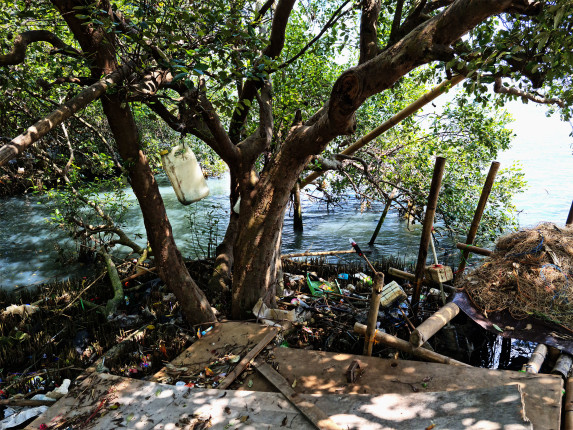 Photo Credit: Plastic waste deposited in a mangrove reserve on Jakarta’s coast by one of the 13 rivers that runs through the capital. The Indonesian government has committed to reducing marine plastic debris by up to 70 percent by 2025, courtesy of Nabiha Shahab/China Dialogue

Novrizal Tahar, director of solid-waste management at the Indonesian Ministry of Environment and Forestry, said “marine plastic waste in Indonesia had already been reduced by over 15 percent between 2018 and 2020,” citing an unpublished report produced by his office.

There is no shortage of regulations on waste management in Indonesia and specifically on marine plastic, said Tahar at a UNDP webinar on ending plastic pollution. “First, we take the regulatory approach. Almost all of our regulations cover the problem from upstream to downstream. Simultaneously we increase the capacity of local governments’ services and waste processing.”

But the government’s efforts appeared insufficient to curb the problem. “Our waste-management system is still not based on segregation,” said Greenpeace Indonesia campaigner Muharram Atha Rasyadi. “It’s the basic collect-transport-dispose method”. Although there are movements to process waste at home, such as through composting, it’s mostly the community’s independent initiatives.” 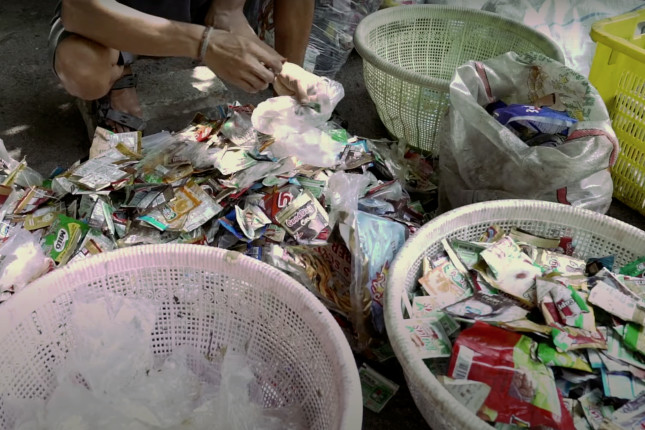 Photo Credit: Single-use plastic sachets. Indonesians rely heavily on these sachets for products such as shampoo and ground coffee, courtesy of Landscape Indonesia

People are still very much dependent on single-use plastics. A lot of consumer goods are packaged in small sachets for single use. Products in sachets, including shampoo, detergent, and coffee, target the middle to lower class, who can only afford to buy these small quantities on a daily basis.

Many sachets comprise layers of different types of plastic, giving them low sell-on value. Few recyclers work with them. Most of it ends up in landfill or spills out to the ocean,” said Rasyadi.

The city dumps most of its waste in a landfill in Bantargebang, a district around 25 kilometers away. In use since 1986, the 110-hectare site is filling fast with waste piling up to 40 meters high. The city’s governor gave the impression that the problem would start being tackled in 2016 when he signed a decree allowing a company to build intermediate treatment facilities. The idea was for waste to be incinerated, recycled, or composted at a number of sites around the city. Progress has been slow.

The waste sent to Bantargebang remains mixed and unsorted. “Up to 70 percent is organic waste. For a city as big as Jakarta, the government has not provided the infrastructure to manage all this waste,” Rasyadi said. “There are some private initiatives, but they are all left on their own to figure it out.”

The Orange Troops in an unwinnable war

Officially, the municipal authority hires 40 to 70 cleaning workers per neighborhood in Jakarta. That’s more than 18,000 for the whole city. Named after the distinctive orange vests they wear, the Orange Troops include street sweepers, canal cleaners and garbage collectors. But they can not manage the quantities of waste they are presented with. To increase the team’s capacity, the city hires freelance workers such as Togar Sinaga. 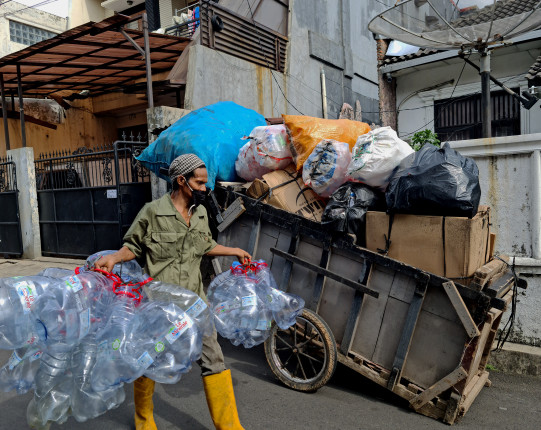 Sinaga, 47, makes his rounds collecting trash from houses in an East Jakarta neighborhood. As a subcontracted rubbish collector he is not paid a monthly wage. His main income comes instead from taking household rubbish to a temporary rubbish site. He earns around US$0.70 for every cartful, plus small tips from homeowners. He supplements this by separating and selling recyclable materials such as cartons, cans, and plastic water bottles, for which he earns an extra US$14 a week.

Improved logistics and a larger workforce will not resolve the country’s plastic waste problem alone. So Indonesia is now pinning some of its hopes on innovative solutions.

The government, together with the United Nations Development Program (UNDP), and the Norwegian government, launched a Southeast Asia-wide competition to help.

The first winner of the Ending Plastic Pollution Innovation Challenge was Nguyen Vo from Vietnam. She developed a drinking straw made out of grass, with the stated goal of replacing 5 billion plastic straws by 2025. The competition prize money has helped her to increase production, she said during an interview.

Other start-ups have begun processing plastic into fuel and other products. Landscape Indonesia, a social enterprise based in Jakarta, is exploring the latter option. “Imagine if we could convert 1.5 million tons of plastic waste into diesel-equivalent fuel every year,” said CEO Agus Sari. The technology could be used for all types of plastic including low-value sachet packaging, Agus Sari added. 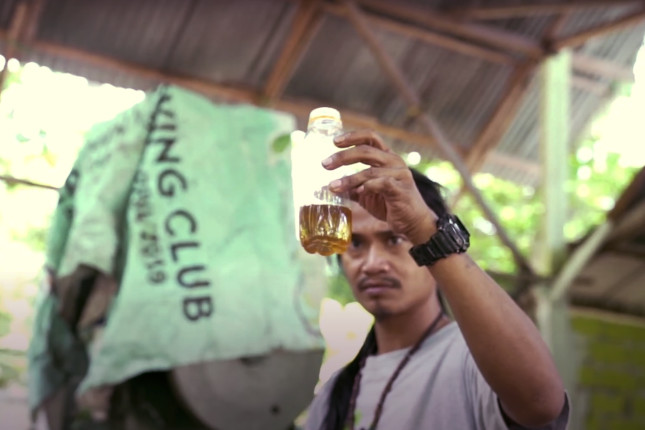 But Rasyadi said producing less waste was more important than reusing and recycling. “We don’t support the concept of converting plastic to fuel, or plastic to energy, because it doesn’t address the root of the problem. People would think it’s okay to use plastic if it can be converted into energy. We use a lot of plastic unnecessarily. We can start with changing our behavior and use less.”

Nabiha Shahab is a freelance writer and communications specialist based in Indonesia. She has worked both in the media and in media campaigning with environmental NGOs since 1997. She holds an MA in environmental management from the University of Nottingham.

What are we doing to stop plastic menace?