stream/download this segment as an MP3 file

New York State has passed Senate Bill S1031C which would require an environmental impact statement for new facilities to determine if they will cause or increase a disproportionate pollution burden in communities. (Photo by Mathaiswasik, Flickr, CC BY-NC-SA 2.0)

On this week’s trip beyond the headlines Environmental Health News Weekend Editor Peter Dykstra and Host Steve Curwood discuss the Biden Administration’s cancellation of three oil and gas lease sales off the Gulf of Mexico and the coast of Alaska. Then they go over a bill passed by the New York State legislation that would limit the construction of industrial facilities near communities already burdened with pollution. For history they look back to 1969 when folk singer Pete Seeger christened the Hudson River sloop Clearwater.

CURWOOD: And with me now on the line from Atlanta, Georgia is Peter Dykstra. Peter is an editor with Environmental Health News, that’s EHN.org and DailyClimate.org. And, you know, as usual he’s taking a look beyond the headlines for us. How are you doing Peter, and what do you have for us today?

DYKSTRA: Hi Steve, I’m going to start off with some kind of mixed news from the Biden administration. They’re canceling three oil and gas lease sales two in the Gulf of Mexico, one off the coast of Alaska. It takes millions of acres out of possible drilling, just as US gas prices are reaching record highs.

CURWOOD: So wait a second, why is this the bad news though, to keep it in the ground from your perspective? Because I don’t know, I think fossil fuels aren’t really good for ecology. 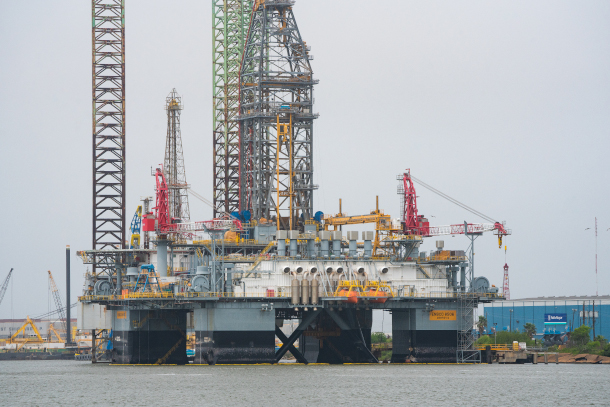 The ENSCO 8506 offshore semi-submersible drilling rig in the Port of Galveston, Texas, in the Gulf of Mexico. The Biden administration canceled 3 large offshore oil and gas lease sales off the cost of Alaska and the Gulf of Mexico. (Photo: Tony Webster, Flickr, CC BY 2.0)

DYKSTRA: Well, the reason that it’s mixed news in a way is that particularly the Alaska lease sale, there was absolutely no interest on the part of the oil companies when it was first offered for lease. And the reason for that is, prices have to be really, really high for the per barrel price, the per gallon of gasoline price for going off shore, particularly in the Arctic, to be worth the trouble. And just as the prices are going up, and just as the prices are worth the trouble for the oil industry, Biden pulls the plug on the lease.

CURWOOD: Of course now I gather, that’s not the least I mean, the lease story that you have for us today?

DYKSTRA: No, there’s another story out of New York state where the legislature has passed a bill, similar to the one that a couple of years ago passed in New Jersey, my ancestral home. The bill is along with Jersey, one of the two toughest environmental justice laws in the entire country.

CURWOOD: So what does this bill do for environmental justice? Everyone seems to talk about it, but not a lot of folks are doing anything.

DYKSTRA: The federal agencies on the federal level, state agencies on the New York and New Jersey level have to consider before citing any potentially toxic, potentially hazardous site in a poor or minority community. As Jesse Jackson said almost four decades ago, there’s a reason that you don’t see nuclear waste dumps sited in Beverly Hills.

CURWOOD: And Peter, one tiny detail here. Now, New Jersey has this law but the New York State Legislature has only passed the bill, any odds that the governor is not going to sign it? I mean, what’s the status of it? Do you think?

DYKSTRA: Well, obviously, New York State is a little distracted right now with the race based mosque this past weekend. But chances are very good that Governor Hochul will sign the bill and it will make its way into law. Two states down 48 to go.

CURWOOD: Alright, now it’s the time in our meetings that you typically look at the history books. Tell me what do you see today? 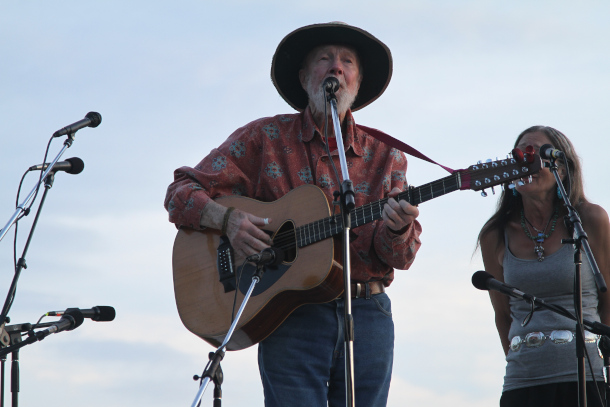 DYKSTRA: Something to do with dirty water in New York and New Jersey, the Hudson River on May 17, 1969. The Hudson River sloop Clearwater is christened by Pete Seeger, the legendary folk singer and other mention. And for the past five decades and more, the Clearwater has sailed up and down the Hudson in the name of a clean Hudson River. Industrial pollution problems, sewage problems. The riverbed they’re still contaminated with PCBs, highly toxic chemicals dumped from two Upstate General Electric factories, years and years ago. PCBs are a very hard thing to clean up.

CURWOOD: Yeah, they’re almost forever chemicals, aren’t they, Peter? But at least the water looks clear on the Hudson River these days.

DYKSTRA: The water looks clear this time of year particularly it’s a beautiful place to be and long lived the clear water for its 50 plus years of educating and a little bit of hell racing on the Hudson.

Today would have been Pete Seeger’s 100th birthday. Clearwater exists because of Pete’s vision and we continue to strip to be guided by his principles.

How have you had been influenced by the music, actions, and spirit of Pete Seeger? #Pete100 pic.twitter.com/OJ9B4pgXww

CURWOOD: Thanks, Peter. Peter Dykstra is an editor with Environmental Health News. That’s EHN.org and DailyClimate.org. We’ll talk to you again real soon.

DYKSTRA: Okay, Steve, thanks a lot. Talk to you soon.

CURWOOD: And there’s more on the stories on the Living on Earth webpage that’s LOE.org.

Sloop Clearwater at 40, Pete Seeger at 90

Living on Earth wants to hear from you!

Newsletter/> Living on Earth offers a weekly delivery of the show’s rundown to your mailbox. Sign up for our newsletter today!

Sailors For The Sea: Be the change you want to sea.

Innovating to make the world a better, more sustainable place to live. Listen to the race to 9 billion

The Grantham Foundation for the Protection of the Environment: Committed to protecting and improving the health of the global environment.

Contribute to Living on Earth and receive, as our gift to you, an archival print of one of Mark Seth Lender’s extraordinary wildlife photographs. Follow the link to see Mark’s current collection of photographs.

Is that a nuclear plant? Behind the Beijing Olympics Big Air Shougang stadium