stream/download this segment as an MP3 file

Wind turbines alongside cooling towers at the Tricastin Nuclear Power Plant in France. Nuclear power can supply a steady source of baseload power to a grid that also gets a significant amount of energy from intermittent renewables like solar and wind (Photo: Jeanne Menjoulet, Flickr CC BY 2.0)

European nations are taking a fresh look at nuclear power as a more secure source of energy than fossil fuels, especially in light of the politics of Russian oil and gas. Maria Korsnick is CEO and President of the Nuclear Energy Institute and joins Host Steve Curwood to discuss why existing and new nuclear technology can help countries reach their net-zero by 2050 carbon emissions targets.

The Russian invasion of Ukraine has also prompted some European nations to take a fresh look at nuclear power as a more secure and carbon-free source of energy. The Belgian government has just announced it will extend the life of two of its reactors. And French President Emmanuel Macron said “the time has come for a nuclear renaissance” when he recently announced plans to build up to 14 new nuclear reactors. Other countries are also looking anew at nuclear power, including the US where the Tennessee Valley Authority is actively pursuing advanced nuclear technology to reduce deadly air pollution from the burning of fossil fuels and to help reach net zero emissions by 2050. Here to discuss is Maria Korsnick, CEO and President of the Nuclear Energy Institute, an industry trade association. Maria, welcome to Living on Earth!

KORSNICK: Glad to be here.

CURRWOOD: So how does nuclear energy fit into goals to reach net zero carbon emissions by 2050, speaking in general?

KORSNICK: Yeah, well I would say, just looking at the United States today, right, nuclear energy is 20% of our energy mix, and more than 50% of our carbon-free mix here in the United States. And I think as you look ahead to net zero, we need to get there and we need to get there affordably. And one of the things that’s beautiful about a pairing of nuclear and renewables is that nuclear is there 7/24, 365, around the clock, and it pairs very well with resources that are intermittent. I think many folks are taking a look at, what does it really take to decarbonize, what does that picture really look like? And I think you’ve seen that in France; just a few years ago, you would hear France talking about slowing down, if you will, from nuclear. So this is a very significant statement on their part that they are looking forward at growing their fleet. We’ve seen a lot of interest from Poland, we’ve seen a lot of interest from Romania, we have done trade missions down to Brazil. Canada just announced in December that they’ve selected something that they want built, it’s American technology that they want built by 2028. So a lot of interest right now in nuclear for its carbon-free future. 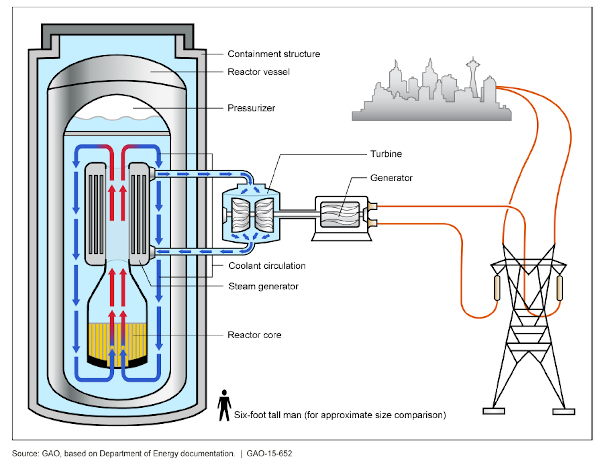 CURRWOOD: Some criticize nuclear power as being very expensive. Power stations take a long time to build, the tab seems to get higher and higher, and especially vis-a-vis renewable energy. It’s just many orders more expensive than renewable. And your response?

KORSNICK: Well, I think you have to really take a look at the entire value proposition. And yes, there are examples of nuclear being expensive. You know, we did a recent study looking at the Pacific Northwest Area, company Energy Northwest, specifically. The governor there in the state of Washington said, Let’s go carbon free, and let’s go carbon free by 2045. And so they took a look, let’s do that all with renewables. And then they said, All right, well, let’s do it with some renewables and let’s do it with some small modular reactors. And adding those small modular reactors saved the customers $8 billion a year. And so again, it’s that combination of that always-there electricity, carbon-free, paired with those intermittent renewables, that at the end of the day, is the most affordable solution for customers.

CURWOOD: So there’s a lot of talk about small modular reactors, whether it’s the pebble bed that the Germans developed and the South Africans tried, and I think the Chinese are doing, and now the TVA is talking about small modular reactors. What are they, and how would they be both safer and more cost effective than the big units? What’s the advantage of these smaller reactors?

KORSNICK: Yeah, I would almost wish that we didn’t name them small modular reactors, I wish we would have named them simple modular reactors. Because what’s really different about them is their simplicity. And the simplicity in the design allows for much less than what you have in the large ones, so not just much less in size, but you need fewer systems, for example, some of the systems are passive, so they don’t need active components. So it’s the simplicity in the design that allows for these things to be made in, say, in a factory setting. And so you’re not sort of building it, almost think about a house, you’re not sort of stick building your house from scratch, but that you’re getting the sort of modular compartment that you can then bring to the site and set up. So the simplicity and the manufacturing of these designs is really what’s making them different. And, you know, a prime place to build a nuclear plant could in fact be where there’s a coal plant today that needs to be shut down, for reasons that they want to retire it. The small modular reactors, those are more the size of a coal plant. It’s very attractive to build a carbon free source there, that also produces a lot of megawatts, maybe similar to a coal plant, it’s a very attractive place for small modular reactors. 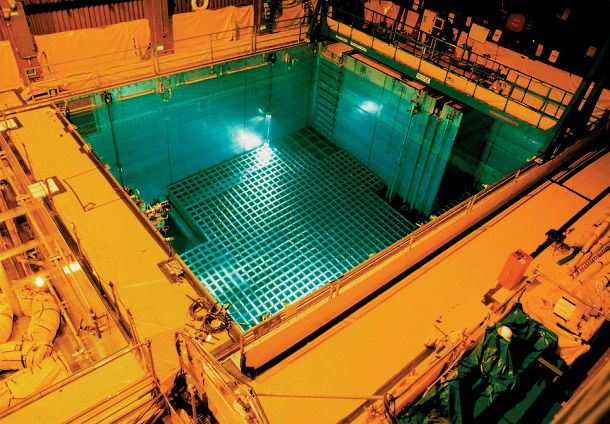 The spent fuel pool containing nuclear waste at the San Onofre Nuclear Generating Station in California, which was taken offline in 2013. Nuclear “waste” contains more than 90% of the potential energy of the original material, according to the US Department of Energy. (Photo: Nuclear Regulatory Commission, Wikimedia Commons CC BY 2.0)

CURWOOD: Simple but safe as well? To what extent does this approach sacrifice safety?

KORSNICK: Oh, not at all. No, these are actually even safer, and I say that because the plants we have today are also very safe. But this passive design actually relies even less on individual action or operator action.

KORSNICK: Yes, I would say some of these designs are — we would use a different term, we call it “walk-away” safe, but yeah, you could walk away and it stays safe.

CURWOOD: What’s the view of the Nuclear Energy Institute and your own about nuclear waste? Most of the time when this discussion comes up, people say oh, yeah, okay, carbon free, but what about all that nuclear waste that remains hot, remains radioactive for thousands of years. And if you reuse it, the way the French do with breeder reactors, then you get plutonium and you could get weapons. In other words, people think that this stuff is really pretty dirty. And we don’t really have great places to put it or good ways to reuse it. What do you say?

KORSNICK: Yeah, it’s interesting. I know waste can be a very controversial issue. And I would be a bit provocative, perhaps, to say, I love nuclear waste. And what do I mean by that? There’s a lot of really good energy still stored in what we call nuclear “waste.” And I would liken it to sort of one man’s trash is another man’s treasure. I think the best thing that we could do is appreciate a lot of the different components that are in that thing we call waste, that in the future, our grandkids and their grandkids, they’re going to want to be able to reuse this. And so we should treat it as we do today, in a very safe way, we should store it in a way that in the future, when we want to, we’ll be able to access it and reuse it, whether we’re reusing it in another reactor, or we’re reusing it for medical needs. And so again, I look at it more as a resource for the future.

CURWOOD: Tell us what you make of what the Biden administration has proposed for the nuclear industry. I know there were some provisions in what was known as the Build Back Better bill, who knows what’s gonna happen with that budget reconciliation, but what do you think of what they were talking about?

KORSNICK: Yeah, first, I’d start with the bipartisan infrastructure bill, because that did pass. And there were many very positive provisions in there for nuclear power. One very important one is the Advanced Reactor Demonstration Project, ARDP, which is funding two new-style plants. And it fully funded that program out for several years, that was to the tune of two and a half billion dollars, so very significant. And that’s a public-private partnership, if you will, that will bring two new designs online before the end of this decade. They also had $6 billion in their for a civil nuclear credit program to help financially support reactors that are at risk of closing. So a really strong vote of support, I would say in that bipartisan infrastructure package. Now, the Build Back Better package obviously has not passed, and we all can have different opinions of what its success may be, but built into the Build Back Better plan are some production tax credits for nuclear power and the current operating fleet that would really level the playing field for nuclear across the board. 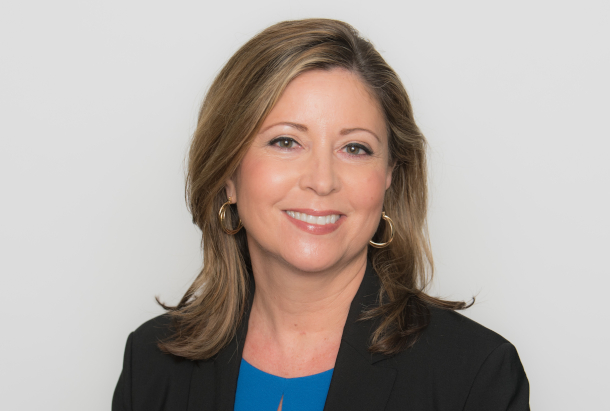 CURWOOD: Right now, oil and gas prices are sky high, you know, you’ve got Russia’s invasion of Ukraine and Europe is acutely feeling the risks of dependence on Russian hydrocarbons, particularly gas. How do you think this volatility is influencing the conversation around nuclear energy right now?

KORSNICK: Yeah, I mean, it’s for an unfortunate reason. And my heart goes out to the Ukrainians and everything that they’re going through. But it’s a stark reminder of paying attention to who you’re doing business with. And the reality is, Russia is also in the market to sell reactors. And Russia is very much interested in doing business with lots of different countries. And why is that? Because they want to control your energy supply. And this is a case where we are very interested in ensuring that the strength of American technology, American operating experience, we operate the best plants in the world, and we want to share that experience and our technology and help others meet their carbon-free pledges. When you do business on nuclear power, you form 100-year relationships. You’re gonna design it, you’re gonna build it, you’re gonna operate it for 60 to 80 years, you’re gonna decommission it. And it’s because of that long term relationship and the value that we place on it and our value for non-proliferation that we should want countries to do business with the United States, and not with state-owned enterprises.

CURWOOD: Maria Korsnick is the CEO and President of the Nuclear Energy Institute. Maria, thanks so much for taking the time with us today.

KORSNICK: Thanks, enjoyed it.


About Advanced Small Modular Reactors from the US Department of Energy

CNN | France announces plans to build up to 14 nuclear reactors