Those who grew up in the area of ​​Stafford Township, especially mainlanders, know the hidden majesty that is the Bridge to Nowhere. The locale, sometimes referred to as the old “telephone farm,” is spread out over 300 acres of Manahawkin Wildlife Management area ..

It once served as a telecommunication point between the United States and Europe during World War II and for several decades after. The beautiful salt marsh is shrouded in the mysterious lore that characterizes Weird New Jersey.

Many teenagers impart the “secret spot” to their friends as an adventure into the pines. The “road to nowhere” is poorly lit at night and pitted with potholes but, with caution, it’s worth the trip. The destination? The graffitied shadow of a thought that might have become a bridge, but didn’t, looking out over Barnegat Bay.

The local landmark now represents the skater subculture on and off our humble sandbar of Long Beach Island.

Not everybody wants to be a walking billboard for Quiksilver, explained Bridge to Nowhere Skateboards owner and founder Ricky Casperson. Why not, rather, represent one’s own home turf? BTNWS allows Southern Ocean County riders, whether they be men, women or children (even) the wee babes!), To rock their locale on a tee, tank or hoodie.

BTNWS pint glasses and mugs suit drinkers of any variety. Riders can also look forward to BTNWS wheels and limited drops of boards. One of Casperson’s goals down the line is to press his own decks.

The name is fitting to the logo – a skateboard snapped in half – because “without your board, you’re going nowhere, but you never let. The brand is a culmination of his love for skating and affinity for music, art and comic collecting. it stop you. ”

Of course, the skateboard is a metaphor for any tool that teaches discipline and self respect, Casperson elaborated. “Land all breaks” is the brand’s motto. 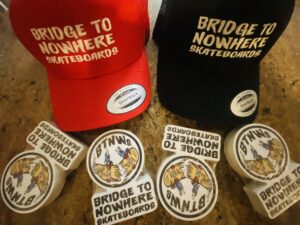 Just like any other kid growing up in the ’80s and looking up to Marty McFly, Casperson – a veteran of the US Army as well as the skate scene – thrived on skateboarding and the fringe music that represented punk life. Not just punk, but grunge and hip hop made up the sonic fabric that weaved the walls of DIY, makeshift skate spots.

“I’ve put in thousands of hours since 1989,” said Casperson, who purchased his first board at Ron Jon Surf Shop. It was only recently that he realized that very board was featured in Tom Petty’s “Free Fallin’” music video. He had always loved the song and video; now he cherishes it even more.

Casperson reminisced on some of his favorite shops, Red Rocker Record Shop (where he purchased his first copy of Soundgarden’s Superunknown), and skate shops Wave Jammer and Cosmic, none of which exist today. However, he credits Island Surf and Sail in Long Beach Township and the Shack in Beach Haven for keeping the culture stocked and thriving.

Now an Ocean Acres resident, Casperson grew up in the Sands Point neighborhood of Waretown. The curbs along Poplar and Holly streets are still missing chunks from his generation of skaters grinding away at them.

Skating was the cornerstone for Casperson’s generation. He likened the sport to baseball. One glaring difference, he emphasized, is skaters were seldom respected, unlike baseball or football athletes. As such, they never had a park to play in. 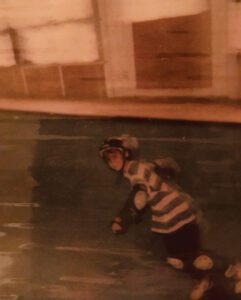 One of Casperson’s fondest memories is winning first place there in a competition for kids younger than 10. He recounted his friends Ralph Constantino and Larry Robertiello were with him that day – and most days back then.

“My mom would drop me off, and the older guys would teach me,” he recalled fondly.

Abruptly, the fun came to a standstill when his mother dropped him off and the park was gone.

“This was before cell phones,” he said with a laugh. “I just skated the parking lot until she got back.”

Once he had a taste of skating ramps and pipes, it became his perpetual mission to re-create that environment, especially when it was too cold to skate. At the age of 15, Casperson was arrested at a makeshift skatepark he and his friends had set up inside My Son Santinos, a derelict restaurant building on the property that would later become home to Mud City Crab House.

The space was a gutted, L-shaped room that the kids outfitted with small wooden ramps and garbage cans assembled in various positions for tricks. One friend, and the only Rollerblader in the crew, filled out a room entirely with stuffed animals. you weren’t there to skate, it was pretty creepy! ”

He recalled the joy of skating indoors while it snowed.

“Then the big kids from the Island and Ocean Acres found out about it and started coming to skate.”

Those big kids came with cars, thus generating traffic that blew up the spot. Now-retired Stafford Township Police Officer Chris Fritz recalled the incident as one of the first arrests of his career and admittedly confessed to Casperson years later it was a pretty sick setup ..

“It was definitely epic!” Fritz confirmed with The Sand Paper.

Skaters are often associated with bad attitudes and delinquent behavior, but why? Because they have nowhere to skate, Casperson reiterated, and are generally stereotyped when seen skating in public. However, now that skateboarding has entered the mainstream, with the Olympics giving the sport its own event in 2021, Casperson argued it’s time to acknowledge this on a local level.

“Skating gets such a bad rap,” he said, referencing parents worried about kids getting injured. He argued that every sport comes with risk of injury, and the solution would be to build a safe skate park, designed by skaters, with beginner ramps such as those on the West Coast.

“We pay the highest taxes in the area,” he emphasized. “We should have the best skate park!”

He asked why a town centered around surfing and skating should not have a safe, well-lit and supervised skate park. Casperson shares this sentiment with many of his neighbors. Over the years, riders of all ages have flooded Stafford Town Hall to lobby for Parents, teens and young children alike are expected to protest the removal at this week’s township meeting.

He went on to elaborate that even regular parks should be a safe and welcoming place for people to go, even after dusk. With proper lighting and cameras, troublemakers could (and should) be banned, he added. Troublemakers are going to make trouble, he resolved. “It’s up to the parents to teach their kids.”

On the other hand, having experienced personal struggles and losses of his own from a young age, Casperson passes no judgment on kids who are going through tough times.

“I know what it’s like to have nothing but a board,” he said.

“I’d stay out until I learned two tricks and come home with scabs on my knees.” In addition to teaching discipline, “it’s just a fun way to let the time pass.”

Rather than let a couple of bad apples ruin the sport for everyone, he asserted, we should let the discipline of the sport and the example of the older riders guide problem kids to a healthier future. a lot to offer. ”

Casperson spent a handful of years as a paratrooper, which was hard on his body. But at 40, he quipped, he still skates as if he’s 16 years old. After his time in service, he spent a brief time as a corrections officer until He went on to earn his business degree from Georgian Court University, which is where the BTNWS dream manifested.

“Sometimes it’s hard to be a civilian,” he explained, sharing that, in the Army, there is a team mentality that seldom exists in civilian life. That is another void filled by skate culture.

A skate park is, as it should be, an environment for anyone and everyone, regardless of age, race or sex, Casperson believes. The magic of the skate park is that “everyone is there for the same reason,” he said. There are people in their 70s still skating. It changes people’s lives. ”

His company was founded on the mission of offering riders and supporters quality and original products, with the larger goal of becoming a collective and bringing awareness to preserving natural lands and making a positive difference for the planet and its resources. attitude of respect toward the environment and fellow riders.

The Bridge to Nowhere location makes for an iconic metaphor and brand for local riders, but it’s not a place he recommends skating, though he did fondly recall riding his BMX bike there when he lived in Beach Haven West.

Eventually, he’d like BTNWS to organize cleanups of spots like Bridge to Nowhere and hold events to raise funds and awareness to help rehabilitate the area, perhaps installing barriers and making it a safer place to drive and hang out. for BTNWS is to help raise funds for, and organize, a community skate park.

“I’d like to be able to mentor kids interested in skating, in the least political way possible,” he shared.

BTNWS is not only about skating, but about promoting community and “a good sense of well-being.” As such, locals don’t necessarily have to be skaters to be part of the culture. The BTNWS message applies to anyone with a dream ..

“Whether it be a skateboard, a surfboard or even an instrument… you mess up, you lick your wounds and you keep going. You don’t quit!”

He recently took his daughter, Macie, to a skate park in Tampa, “and I just sat back and watched that glow in my daughter’s eyes when she realized’This is achievable. This is something I can do!’” Her latest hero is teenage female skater Sky Brown.

Casperson encourages his daughter to keep a dream in sight, whether it be skating or not. “She’s like me; she has a lot of interests. I try to teach her’You can like a lot of things, but don’t let that one dream escape.’”

The skate brand (and the hope for a local skate park) is a longtime dream of Casperson’s, forced into reality by the pandemic. Emerging from quarantine into today’s climate, fostering space for an outdoor community may be exactly what the doctor ordered.

Until then, BTNWS apparel can be rocked with that dream in mind. Visit bridgetonowhereskateboards.com or search Bridge to Nowhere Skateboards on Facebook and Instagram to follow the journey, await limited edition drops of boards and wheels, and check out the latest apparel.

“You can see by our logo: The boards are broken… as many things tend to fade at times, but leaning forward and staying on board is what counts.”

10 of the Most Endangered Species in the Ocean | Earth.Org –Pastry | Present