Soybeans have been a major cash crop for Kathy and Glen Tyson on their farm near Olivet, in Osage County. Courtesy photo.

Working one job for half a century is a major accomplishment but Glen Tyson has been in his “second profession” even longer.

During those five decades, the Olivet man has also been what most would also consider a full-time farmer.

“I’ve had two jobs, a day job and an evening and weekend job,” Tyson admitted. “I was farming before I worked for the highway department, and I plan to keep right on farming.”

Announcing his retirement officially publicly with a Facebook post, Tyson instantly got a complimentary rebuttal. “All those hours on the official clock don’t include your overtime nights and weekends, Saturday and Sundays,” an acquaintance posted.

“It was all part of the job, which worked well with the farming,” Tyson said. “My last day was tough saying goodbye to a bunch of very good friends and employees. They’re the ones who’ve been so important in making my career much more than just a job.” 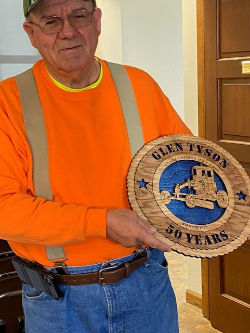 A special plaque was presented to Glen Tyson when he retired from 50 years working for the Osage County Highway Department. Courtesy photo.

Tyson started at the Osage County Highway Department on Aug. 9, 1971, retiring five decades later as public works director. It could likely be a record of longevity of employment by a county highway department. Friends, family and coworkers joined in the final day celebration.

“I grew up farming and worked with my dad after I started for the highway department,” Tyson said. “Then I continued to farm after Dad was out of the operation. I’m still farming and might even expand some now.”

Just 20 years old when he started working for the highway department, Tyson celebrated his 70th birthday last month. A late retirement, considering others of the Baby Boomers generation, who’ve stopped working a decade or more sooner.

“I actually got the job because I was a farm boy and knew how to drive a dump truck,” Tyson said. It wasn’t long before the truck driver was promoted to the bridge crew.

“I had taken welding courses at Flint Hills Vo-Tech and worked at Hesston Corporation one summer,” Tyson said. “So, I was more qualified than some of the other workers because the bridge crew needed somebody who could weld.”

Moving into a motor grader position in 1980, Tyson advanced to become the county road and bridge supervisor in 1998. “That transitioned into being the Osage County public works director,” Tyson said.

It’s quite an extensive management position overseeing much more than roads and bridges. Among them were noxious weeds, landfill, recycling, sewer system and more.

“I was fortunate to have a great secretary all of those years,” Tyson appreciated. “She was the best, knew everything, kept track of what was going on, and fortunately is still there.”

About 60 percent of his time was spent outside the office overseeing all of the jobs within his job. “I had 25 employees working under me at the peak,” Tyson said.

With Osage being a rural county, township boards are responsible for some country roads. “The Highway Department is responsible for all farm to market routes and bridges,” according to Tyson.

A bridge is anything more than a 20-foot span, but on top of that were all culverts under Tyson’s supervision. Osage County is responsible for maintaining 162 miles of gravel roads and 84 miles of paved roads in the 720-square mile area. There are 237 bridges and 450 culverts.

After a major bridge collapse in Minnesota during 2007, increased attention was required for county bridge inspections and maintenance.

Working for Osage County commissioners throughout his management career, Tyson acknowledged their foresight cooperation. “Many of the commissioners have been farmers and understood the importance of maintaining and improving roads and bridges,” Tyson said. “We generally always worked quite well together.”

When blizzards came, Tyson and his crews were called into duty. “I usually averaged about 100 hours of overtime every winter,” he said.

Previously having a cow herd along with crops in his second job farming, Tyson has most recently backgrounded steers. “I’m thinking about getting back into the cow business now that I’m retired,” he said.

All of the cropping operations including owned and rented ground have generally been done personally.

“I’ve had mostly soybeans, a little corn sometimes. I’ve always done my own tillage, planting and harvesting, with occasional hired or trade help,” Tyson said. “I could just do so much in one evening, would stop and do some more the next day.” Additional crop acreage might be rented if it becomes available.

Native hay ground around Melvern Lake has been leased for a number of years, too. “My bid to lease that prairie grass to harvest as hay has already been approved for the next five years,” Tyson said. “It gives me something to do in the summer putting up big round bales to sell during the winter.”

Married 49 years to his wife, Kathy, Tyson has two sons and two grandchildren, none involved in farming operations. “Kathy worked for Bluestem while, but had been with the Three Lakes Education Center at Lyndon 30 years,” Tyson said.

A volunteer fireman for a long time, Tyson and his wife are also on two cemetery boards. “They’re small cemeteries where we both have family buried,” he said. “There’s more to those volunteer positions sometimes than what one might expect. Somebody needs to do it and we’re glad to help out.”

Vacations have not been a priority. “Oh we’ve taken a few weekend trips to Branson, Mo., and other places we wanted to see,” Tyson said.

Presently, despite being officially retired, Tyson has kept busy with “honey-do-jobs” for Kathy on top of farming. “I told her that would have to come to an end when I start planting soybeans here pretty soon,” he said.

“It has been a good time to catch up around the farm and home. We will probably take a few more extended trips. But I always have to get back to farming. It’s sure my full-time job now,” Tyson verified. 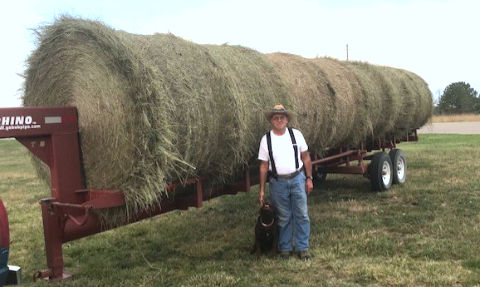 Glen Tyson leases native hay ground around Melvern Lake for putting up big round bales to sell during the winter. Courtesy photo.

I’m a farmer and sometimes feed my cows Skittles