Reflecting on her childhood, Tucson, Ariz., Mayor Regina Romero points to her father as the figure who lit an environmentalist fire within her.

Any chance he’d get, Romero’s father would take his wife and six kids to an 800-acre ranch in the Sierra Madre mountain range of Sonora, where they learned how to ride horses, direct cattle, and to respect the wildlife, such as bobcats and brown bears.

“We invaded their space,” he would tell them.

At the ranch, there was an outhouse instead of running water, rivers instead of showers. It was very rudimentary, Romero told EHN.

But riding through these biodiverse mountains on horseback made it all worth it.

“It was just so liberating,” Romero said.

Five years ago, Romero’s father passed away. Still his legacy lives on, as Romero, the first-ever Latina mayor of America’s 33rd largest city, uses her platform to build an environmentally resilient community.

In Feb., Romero solidified a pledge to plant 1 million trees in the semi-arid desert city by 2030, when she joined the 1t.org US Chapter Stakeholder Council, a group of public, private and nonprofit leaders committed to the restoration of 1 trillion trees globally.

The US chapter, including REI, National Forest Foundation, Amazon, the City of Dallas and the City of Tucson, have committed to more than 1 billion trees thus far.

“Climate change waits for no one,” Romero said. “Without a liveable community, we have no Tucson.”

According to a Climate Central report, Tucson has warmed by 4.48 degrees Fahrenheit since the first Earth Day in 1970, which is more than Phoenix, 110 miles to the north.

“It’s not that the heat is seeking out low-income populations,” lead author, John Dialesandro, a Ph.D. candidate studying urban climatology at University of California, Davis, told EHN. “It’s a lack of greenspace.”

In the desert Southwest, the extra heat that low-income neighborhoods endures often coincides with lack of air conditioning. Many households must choose between air conditioning, healthcare, and food, one University of Arizona paper said.

These communities with less indoor cooling often have fewer trees to provide shade as well.

Some Tucson neighborhoods with high poverty rates are only 1 to 2 percent shaded by tree canopy, according to an American Forests tree equity map.

This is an issue of public health, Adriana Zuniga, an assistant research scientist in the University of Arizona’s College of Architecture, Planning and Landscape Architecture, told EHN. 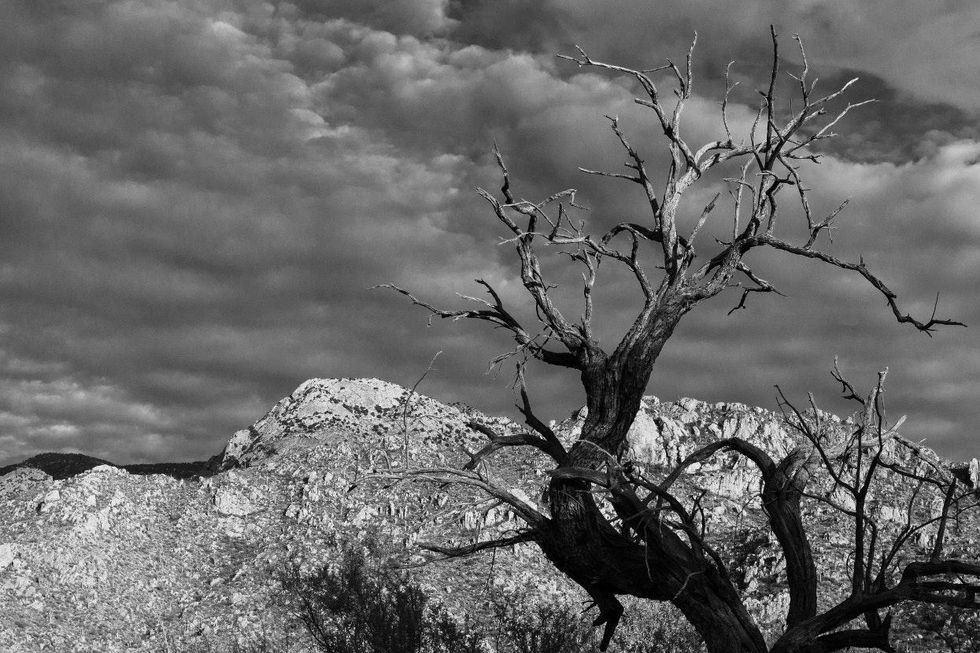 2020 was Tucson’s driest year on record, at only 4.17 total inches of rainfall. (Photo credit: Sean Benesh/Unsplash)

“Their habitats have been fragmented so much from urbanization that every spot of vegetation counts,” Zuniga said.

Migratory pollinators are declining in the Sonoran Desert. More than 10,000 pollinator species are at risk in the Southwest, according to the Desert Botanical Garden in Phoenix.

The monarch butterfly, known for its remarkable blood-orange wings, is a keystone species that relies on nectar resources in southern Arizona during its spring migration.

Over the last two decades, monarch populations have fallen by 80 percent. Some of the causes include climate change, drought, deforestation and declines in milkweed plants, which female monarchs rely on for laying eggs.

“They desperately, desperately need our help in developing those patches of habitat for them to use while they migrate back and forth from Mexico, all the way to Canada,” Zuniga said.

Restoring the watershed during a drought

Trees need water. And the Southwest is in a drought.

Thus, planting 1 million trees in the next decade has faced criticism.

But Lisa Shipek, executive director of Watershed Management Group in Tucson, believes that the initiative is realistic if native, drought-tolerant trees are planted.

“Velvet mesquite trees, desert ironwood, blue palo verde—there are a number of trees that are very appropriate to plant in the city, are found at these low elevations, and can be sustained just on rainwater,” Shipek told EHN.

Before the mid-1900s, Tucson had a platter of perennially flowing rivers and creeks, such as the Santa Cruz River, Rillito River, and Sabino Creek. Then came over-pumping and massive urban development.

Now, it is rare to see flowing water.

In urban areas, where much of the surface is paved and impermeable, the million tree initiative could allow more rainfall to reach Tucson’s watershed, according to Shipek.

“Putting in a rain basin with every single tree will help restore the watershed and ensure more water is infiltrated where the rain is falling,” Shipek said.

A rain basin is a surface that allows rainwater to soak in and feed the trees, and indirectly, Tucson’s groundwater. Groundwater contributions to streamflow.

Rainwater will be the primary fuel for the million trees initiative. When Romero entered office, she and her council approved a green stormwater infrastructure fee, which charges the average residential water-user $1 per month. Over the next three years, the fee will generate up to $7 million for sustainable stormwater harvesting in parks, streets, and parking lots, according to Romero.

Relying on rain in a drought is tricky, but according to Katie Gannon, program director at Tucson Clean and Beautiful, rain will reach these trees by way of nature. When more trees are present, the surrounding air becomes cooler, causing more clouds to drift into the low-pressure system, she told EHN.

4,000 people to observe itikaf in Prophet’s Mosque during last ten days of Ramadan