With white sandy beaches, cerulean waters, and lush jungles, Indonesia’s Raja Ampat Islands are some of the world’s most beautiful islands—and currently under threat from a growing plastic waste crisis. Covering 40,000 square kilometers of land and sea off the northwest tip of West Papua, Raja Ampat lies at the intersection of the Indian Ocean and Pacific Ocean tides in a biodiversity hotspot known as the Coral Triangle.

The city of Sorong, West Papua’s provincial capital and the gateway to Raja Ampat, was recently deemed one of the dirtiest cities in Indonesia. It is but a microcosm of the larger national plastic crisis. Even though government policies, grassroots organizations, and numerous international aid and business projects are working to meet Indonesia’s goal for net-zero plastic waste by 2040, the country’s plastic problem will continue to grow if drastic steps are not taken. A recent World Economic Forum report estimates that Indonesia’s plastic pollution could reach 6.1 million tons per year by 2025, with 780,000 tons of this plastic waste flowing into the country’s rivers and seas.

All plastic waste is not created equal, and a large portion of Raja Ampat’s plastic waste is low-value plastic such as sachet pouches. Small sachets are often too troublesome for recyclers to collect and difficult and expensive to recycle. These lightweight, flexible sachets are therefore often left to damage fragile ecosystemsthreatening Raja Ampat’s US$3 billion annual reef tourism industry.

One individual who has been spearheading efforts to improve Raja Ampat’s plastic waste management is Virly Yuriken. Virly, who was featured in the China Environment Forum’s recent InsightOut publicationserves as Program Director of the Misool Foundation, a conservation NGO based in Raja Ampat. The Misool Foundation aims to further conservation and environmental goals by engaging and empowering local communities. One core activity of their outreach is the Bank Sampah Project. Bank Sampah establishes and supports community waste banks, buys recyclable waste from local waste banks, and then processes the waste for resale to recyclers. Virly has worked with the Misool Foundation and Bank Sampah since 2018, when she started as an intern and assisted a group of women using sachets to make wallets and bags. Today, Virly focuses on educating the community and changing plastic consumption patterns. 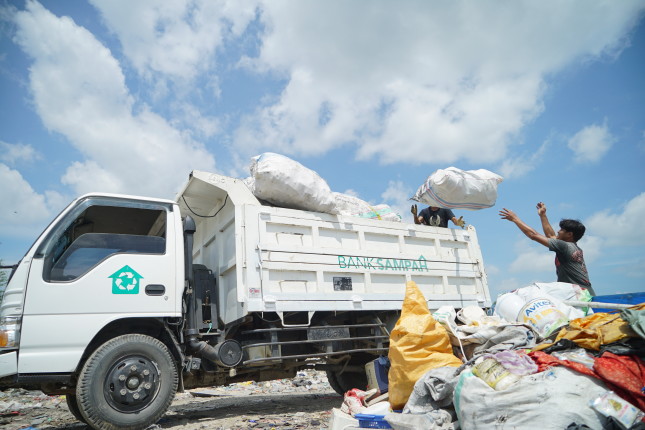 CEF: What inspired you to get into waste management work?

VY: I never thought I would be working in waste management, but when I started volunteering at Misool Foundation, I had a conversation with a community member who opened me up to the idea. I asked her why she wanted to be a part of this waste management work and she replied: “When I die, I don’t want to be buried in a land of trash.” That single sentence really changed my mind. I realized if we don’t manage our waste better, all of Indonesia’s small islands will become saturated with landfills.

Putting your trash in the trash bin is not enough. We each need to sort and reduce waste so we don’t cover our limited land with waste. The next generation will need to live on this land.

CEF: What aspect of the plastic waste problem is Bank Sampah best at solving?

VY: At first, we educated the community to not throw trash in the ocean and streets or to burn it. People were sorting trash, but they had no place to take it. So as part of our Bank Sampah work we started collecting, processing, and selling some types of waste to the recycling factory in Java.

But what makes us different from a usual Bank Sampah is that in addition to incentivizing waste collection and shortage, we gradually stress education to foster behavioral changes to reduce plastic consumption. For example, we used to pay people to collect sachets and then we shipped them from Sorong to Java, but the revenue from recycling did not cover the high shipping costs. When we asked community members to stop collecting sachets as they were too costly to recycle, people started to reduce their consumption of sachets altogether.

CEF: Instead of shifting the waste to Java are you building local infrastructure?

VY: In our first year in 2014, we had 12 waste collection points. That rose to 90 in 2019 and today we have 115 collection points. Groups who want to run these sites are setting them up in schools, churches, and mosques. The growing number shows how committed and enthusiastic the community is to sorting waste.

In 2018 and 2019, we trained some communities and local governments in two different regencies so they could copy our model there. In our area we have a big warehouse to process the waste from the communities, but unfortunately the two regencies have not yet built such infrastructure.

CEF: Will it be feasible to build more recycling plants outside of Java, on small islands throughout Indonesia?

VY: The central government has a plan to build a big recycling center in the east part of Indonesia. We hope that will happen in the coming years. But personally I think it is problematic because when you have a recycling center close to your area, other industries will end up selling more single-use-plastic products. We need to think carefully about scaling up recycling infrastructure and instead focus more on waste reduction.

CEF: What are the impacts on the local community as you change their behavior?

VY: There is a small village near Sorong that has a lot of traditional fishermen who go out in boats with just one fishing pole. We were pleasantly surprised that the fisherman joined the Bank Sampah initiative in the first month we opened it. They had serious plastic pollution in their fishing areas and in the second month, they brought in a lot of plastic waste. It ends up once they knew about Bank Sampah, they started fishing further out to collect more floating plastic to get it for the waste bank.

We never taught them to collect the plastic waste from the sea and they were motivated to do the hard collection work because they have seen how plastic pollution is damaging their fisheries. Like other coastal villages, they are very passionate about protecting the sea and making sure they will have sustainable fisheries.

CEF: What sort of gender or equality issues can be involved for marginalized groups?

VY: At first, our Bank Sampah work targeted women and men. Then we realized that men just collect the waste to earn money for themselves. However, by educating women, they will influence all of the people in their household and communities. I am really glad that our members are mostly women who make sure their family has better waste management. They are happy to know that they have a big impact. 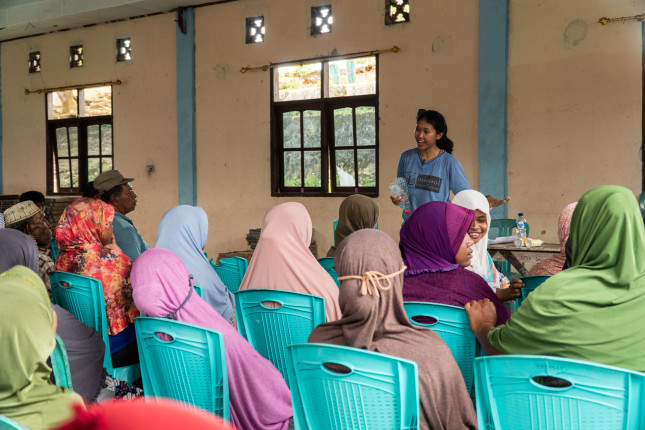 Ruyi Li is a researcher at Wilson Center’s China Environment Forum. Her recent focuses are waste management in Asia and low carbon transition in China. She graduated from Johns Hopkins University (SAIS) with an MA in Energy, Resources & Environment and International Economics.

Abigail Long is a researcher at Wilson Center’s China Environment Forum. Abigail is pursuing a simultaneous MA and BA in East Asian Studies from Yale University. She is also enrolled in Yale’s Energy Studies multidisciplinary program.

How You Can Get FREE Groceries in SG

Why we should embrace all refillable beauty