Sunday, May 22nd 2022, 3:25 pm –The sugar deposits in the seagrass meadows form “one of the largest piles of sugar on Earth,” according to the researchers.

Researchers from the Max Planck Institute for Marine Microbiology report that mountains of sugar have been discovered hiding underneath seagrass meadows across the world’s oceans.

Seagrass meadows are amongst the top carbon-capturing ecosystems — just one square kilometer of seagrass stores nearly twice as much carbon as forests on land at a rate 35 times faster, according to the Institute.

To better understand these carbon-capturing powerhouses, the scientists conducted a study off the Italian island of Elba where they took samples of seagrass meadows and their surrounding sediments. Their data revealed that sugar concentrations underneath the seagrass were at least 80 times higher than those found. in other marine ecosystems.

“To put this into perspective: we estimate that worldwide there are between 0.6 and 1.3 million tons of sugar, mainly in the form of sucrose,” stated Manuel Liebeke, a scientist at the Institute, in a press release.

“That is roughly comparable to the amount of sugar in 32 billion cans of Coke!”

UNDERSTANDING THE ROLE OF MICROORGANISMS

Seagrass consume significant levels of carbon dioxide because of their symbiotic relationship with bacteria in which both species benefit from each other.

Sunlight allows the plant to capture carbon dioxide from the water and convert it into sugar molecules, which are made up of carbon, hydrogen, and oxygen. During periods of peak sunlight, such as the early afternoon or summer season, the plants produce more sugar. than they need, so they store the extra sucrose around their roots in the seafloor.

Bacteria living around the plants’ roots consume this sugar, which gives the bacteria energy to produce more nutrients, such as nitrogen, that fertilize the seagrass meadows. This symbiotic relationship was documented for the first time by the research team and was published in Nature Ecology & Evolution.. 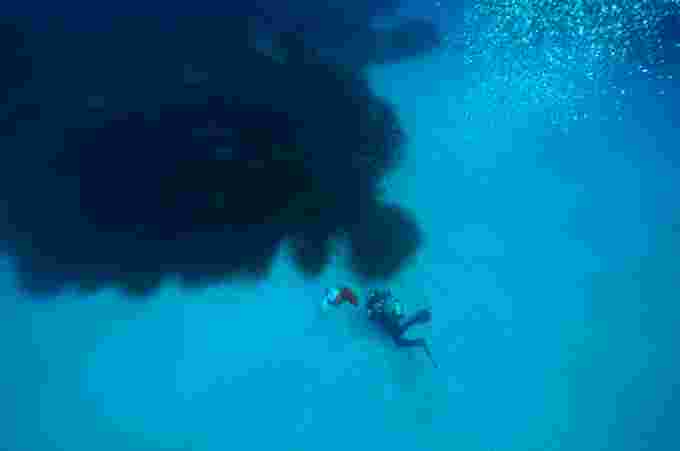 The study reported that the giant piles of excess sugar were not being consumed by the bacteria due to phenolic compounds released by the seagrass, which cannot be digested by many microorganisms. This was a key finding for the researchers, as it confirms that the carbon in the sugar stays in these underwater ecosystems and out of the atmosphere.

The research stated that if microorganisms consumed the sucrose stored by the roots of the seagrass, at least 1.54 million tons of carbon dioxide would be released into the atmosphere, which is equivalent to the carbon emissions from by 330,000 cars in one year.

Seagrass meadows account for 10 per cent of the ocean’s carbon storage capacity despite only covering 0.2 per cent of the seafloor. The researchers reported that despite the critical role seagrass meadows play in the global carbon cycle, they are in rapid decline due to coastal developments and stressors imposed by the changing climate.

Up to 33 per cent of global seagrass may have already been lost, which the Institute stated is “comparable to the loss of coral reefs and tropical rainforests.”

“Our study contributes to our understanding of one of the most critical coastal habitats on our planet, and highlights how important it is to preserve these blue carbon ecosystems,” the study’s first author, Maggie Sogin, stated in the press release.

Travel Heats Up on St. Croix & St. Maarten with 30% Off at All Divi Resorts