During February’s Lunar New Year holiday, Vietnam Zero Waste Alliance coordinator Xuan Quach and her family were returning home to Thai Binh. When they were halfway home, Xuan’s brother nonchalantly tossed a plastic bottle out the window. Xuan opened her mouth to chide her brother, but was surprised when her niece scolded him, “Dad! Don’t contribute to plastic pollution!” Xuan grinned, knowing that all of her hard work educating the public about the dangers of plastic waste was paying off.

The sound of laughing and shouting echoed in the gymnasium at the Genesis School in Hanoi city, as elementary school kids and their teachers put the final touches on plastic waste art displays and university students joked with each other as they set up posters and information tables on their environmental science projects. Beaming with pride and out of breath, one group of students practiced the rap song they wrote and choreographed about reducing plastic waste. The Genesis school was ready to host the first Zero Waste School Festival in Vietnam. 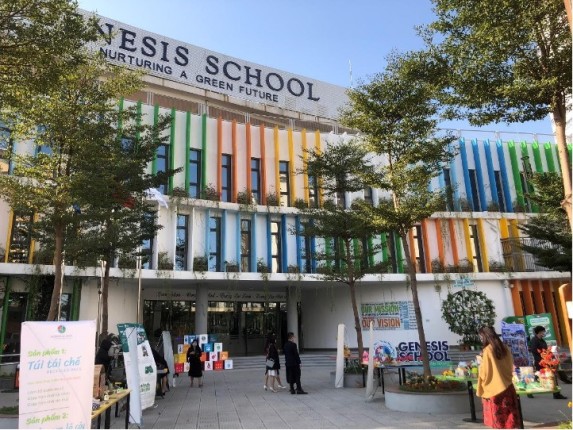 From modest origins to an alliance of zero-waste schools

Xuan Quach works in Da Nang city, the birthplace of Vietnam’s zero-waste school network, where her niece learned about the plastic waste crisis. Since 2020, the VZWA has expanded to schools in Ho Chi Minh City and Hanoi. “My niece demonstrates how the zero waste school approach is intended to work,” Xuan explained. “It’s one stone, two birds—we reach the children and teachers first, but we also reach the parents.”

The Center for Adaptive Capacity Building (CAB), a small NGO in Da Nang, has the mission of bringing the zero-waste school movement to Vietnam. In 2020, with the support of the Global Alliance for Incinerator Alternatives, CAB joined forces with Ngu Hanh Son High School, Le Lai Primary School, and OneSky Kindergarten to organize a solid waste assessment and plastic waste audits of each school. They also surveyed the teachers and students on their waste “literacy.” The goal was to channel research results toward increased awareness and behavior change.

Thanks to social media, the Zero Waste School has begun to catch its stride. Many other schools now contact VZWA for advice on building their own zero-waste schools.

In early 2021, with the support of Break free from Plastic (BFFP) and Pacific Environment, VZWA met with leaders of the University of Economics in Ho Chi Minh City (UEH), who sought to become the first zero-waste university in the city . Based on the results of their waste auditing and stakeholder surveys, the university developed an action plan towards a Green UEH. One of their innovative ideas is the UEH Zero-waste Living Lab, which aims to solve the university’s waste problem through a combination of education, research, operation, and administration, and form a replicable process for other university campuses. UEH’s proposal won’t first place in the 2021 WasteAid zero-waste city challenge.

In 2021, with help from VZWA, the Genesis School in Hanoi developed a zero-waste school plan. Every month, together with VZWA, Genesis School organizes at least one plastic issue workshop for staff, teachers, students, and their parents on waste reduction practices, and organic waste treatment at home, reaching over 1,000 people each month. Genesis leaders also filmed a video of a rap song written by students advocating garbage sorting and reducing single-use plastic. The video reached many on social media and received acclaim from communications professionals, inspiring more students and faculty members to participate in the zero-waste plan.

The Zero-Waste School Festival has catalyzed 1,000 engagements in zero-waste school seminars and exhibitions in Vietnam over the past two months, reaching more audiences through social media. Despite the challenges posed by the COVID-19 pandemic, after two years of work, the zero-waste school movement has influenced preschools to universities, and received the support of schools and organizations in many provinces including schools in the northern mountains. Initial successes in the Genesis School and Ho Chi Minh City University of Economics also are inspiring other schools to participate. 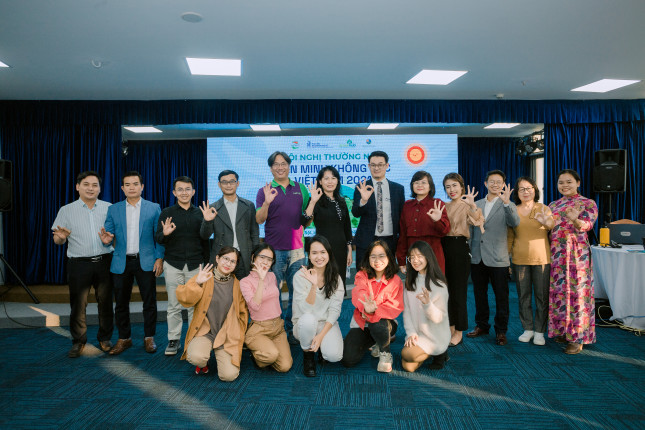 VZWA helps schools design and build their own unique zero-waste school model. In 2022, VZWA aims to help another 30 to 50 Vietnamese schools by encouraging resilience and cultivating continuous momentum. The VZWA encourages flexibility by first helping schools conduct an input survey to analyze the school’s waste stream and create a strategy that fits the community’s cultural characteristics. Then, the school’s faculty can start to build, test, and revise their own unique zero-waste model.

Community behavior change around waste is extremely difficult, taking decades to achieve and requiring constant monitoring and adjustments from local leadership and supporting organizations. To maintain motivation, VZWA and the schools set short-term goals (2-3 years) to achieve and celebrate. The VZWA reviews and evaluates the goals and adjusts strategies to keep partner schools motivated and effective in their zero waste education work. Also, VZWA hosts contests with rewards to keep schools and communities engaged, inspiring leaders and partner organizations to participate.

As VZWA continues to recruit new, young adherents over to zero waste, their parents are being brought along with them. “My brother isn’t the only one being called out by his daughter,” laughed Xuan. “I just ran into a friend the other day who I once criticized for drinking bottled water at a meeting. And guess what? She has transitioned to refillable cups now that her son has learned about the problems of plastic pollution at school!”

One stone for two or three (and hopefully millions) birds in the bush!

Special thanks to Nicole Portley, Marine Campaign Director at Pacific Environment for help in editing this blog.

Vietnam Zero Waste Alliance is led by Xuan Quach. VZWA is a network of different organizations and individuals who have the same interest in applying zero-waste practices to better manage solid waste, reduce plastics, save natural resources, and protect the environment.

What are we doing to stop plastic menace?