LAWRENCE – Three students at the University of Kansas are nominees for Udall Undergraduate Scholarships, which recognize students who demonstrate leadership, public service and commitment in the fields of tribal public policy, Native health care or the environment.

The Udall Undergraduate Scholarship is a federal scholarship that honors the legacies of Morris Udall and Stewart Udall, two former Arizona lawmakers whose careers influenced American Indian self-governance, health care and the stewardship of public lands and natural resources.

The Udall Foundation administers the program. This year, the foundation will award 60 students with scholarships of up to $7,000 each. Selected scholars will also receive access to the Udall Alumni Network and attend a four-day scholar orientation in Tucson, Arizona. Students must be nominated by their university to apply, and universities are limited in the total number of nominations they can make. At KU, the nomination process is coordinated by the Office of Fellowships within Academic Success. Students interested in applying next year should email fellowships@ku.edu.

Claire Dopp, of Olathe, is a graduate of St. James Academy and the daughter of Mike and Angie Dopp. She began researching in the lab of James Blakemore, associate professor of chemistry, during her freshman year through the Emerging Scholars Program and has since been named a Beckman Scholar. Her research involves the synthesis and characterization of complexes containing vanadium to learn more about their structural and electrochemical properties. Understanding the trends between such characteristics opens the door to developing safer and cheaper methods of spent nuclear fuel repurposing. Dopp serves as a nongovernmental organization (NGO) observer for the American Chemical Society and attended the United Nations Framework Convention for Climate Change in Glasgow, Scotland, in November 2021. She is also an information session panelist for the KU Center for Undergraduate Research and has Served as the Kansas Union gallery coordinator for the Student Union Activities programming board. 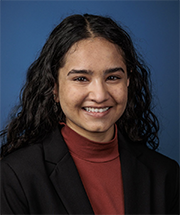 Simmi Rana, from Overland Park, is a graduate of Blue Valley West High School and the daughter of Baljit and Gurwinder Rana. A double major in environmental studies and sociology with a minor in political science, Rana is a member of the Lawrence chapter of the Sunrise Movement and serves as the treasurer and a dancer for KU Jeeva, the KU Bollywood fusion dance team. She served as a web and social media intern at CleanAirNow in summer 2020, and in summer 2021, she started gaining experience with analytical chemistry as a research assistant at the Kansas Biological Survey. Rana has participated in two large fieldwork events as part of the Aquatic Intermittency on Microbiomes in Streams project and also did fieldwork alongside a graduate-level researcher throughout fall 2021. 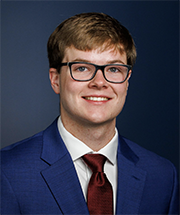 Turner Seals, from Topeka, is a graduate of Washburn Rural High School and the son of Clista Seals and Steve Seals. A double major in finance and environmental studies, Seals is the chair of the Student Environmental Advisory Board, executive member of the Memorial Corporation Board and a university senator within KU Student Senate. He currently serves as an investment analyst at Jayhawk Capital Management, and in summer and fall 2021, he interned with The Climate + Energy Project. Seals’ research experience began in spring 2021 when he created a business, The Green Exchange, to reduce waste within student housing. He also initiated a project to start recycling programs within KU’s Greek houses, which led to his appointment as sustainability chair of Beta Theta Pi, Alpha Nu chapter.