Most polls provide insights into people’s attitudes based on closed test questions. Such questions bring lots of valuable information but have some downsides – for one, people cannot express themselves freely outside of the topics they are asked about. As part of the Sinophone Borderlands online public opinion survey in China in March 2022, we asked 3,000 Chinese respondents (split into six groups) open-ended questions about what they thought about the United States, Russia, Japan, Europe, Singapore, and Africa . Here is what they had to say.

The United States was commonly thought of as an advanced and powerful state, yet hostile to China, untrustworthy, and tending to interfere in other countries’ affairs. “Hegemon” was the most prevalent association (70 out of 500 respondents mentioned it), followed by “advanced technology,” “bossy,” “developed economy,” “powerful,” and “war.” Current US President Joe Biden received about half the amount of mentions compared to his predecessor, Donald Trump, but neither was mentioned frequently.

Furthermore, “COVID-19” was a common association, perhaps as a simple reference to how the pandemic was handled in the United States. But it could also be a consequence of exposure to conspiracy theories claiming the US was the source or even manufacturer of the coronavirus – theories Chinese party-state spokespersons and social media accounts have endorsed.

Get briefed on the story of the week, and developing stories to watch across the Asia-Pacific.

When asked whether their perception of the US had changed in recent years, 60 percent of the respondents said it had worsened; for 25 percent, it got better and 15 percent reported no change in their perception. Respondents whose perception of the US worsened mentioned in a separate open question, reasons such as the mismanagement of the pandemic, American hegemony, instigating wars, meddling in the affairs of other countries, but also the trade war, and generally suppressing China. Respondents very commonly used negative adjectives such as bossy, arrogant, selfish, shameless, unfriendly, but even retarded or vicious. Those who said their opinion of the US changed for the better listed primarily economic reasons and particularly advanced technology for the improvement.

When it came to Russia, the first associations of Chinese respondents were mostly positive, although the intensity of positivity did not appear as strong as the negativity towards the US. Many associations seemed to be based upon stereotypes: “vodka,” “beautiful girls,” “bears,” and adjectives such as “vast” and “cold” appeared many times each. The most frequently mentioned term was “warrior nation” (more than 80 mentions out of 500), and while “war with Ukraine” was recorded in the responses, it did not appear to have either a negative or positive tone (only one single response mentioned that “Russia attacked Ukraine” and a few respondents referred to an “invasion,” without further details). “Putin” as the Russian leader seems central to Chinese images of Russia – Putin’s name was the second most frequent association with Russia for Chinese respondents.

In contrast to the United States, Russia is clearly seen as a friendly country. Still, the prevalence of stereotypes, including negative ones, may also suggest this friendliness does not have deep social roots and is driven by a pragmatic recognition of the necessities of state-to-state relations, along with the persona of the current Russian leader. 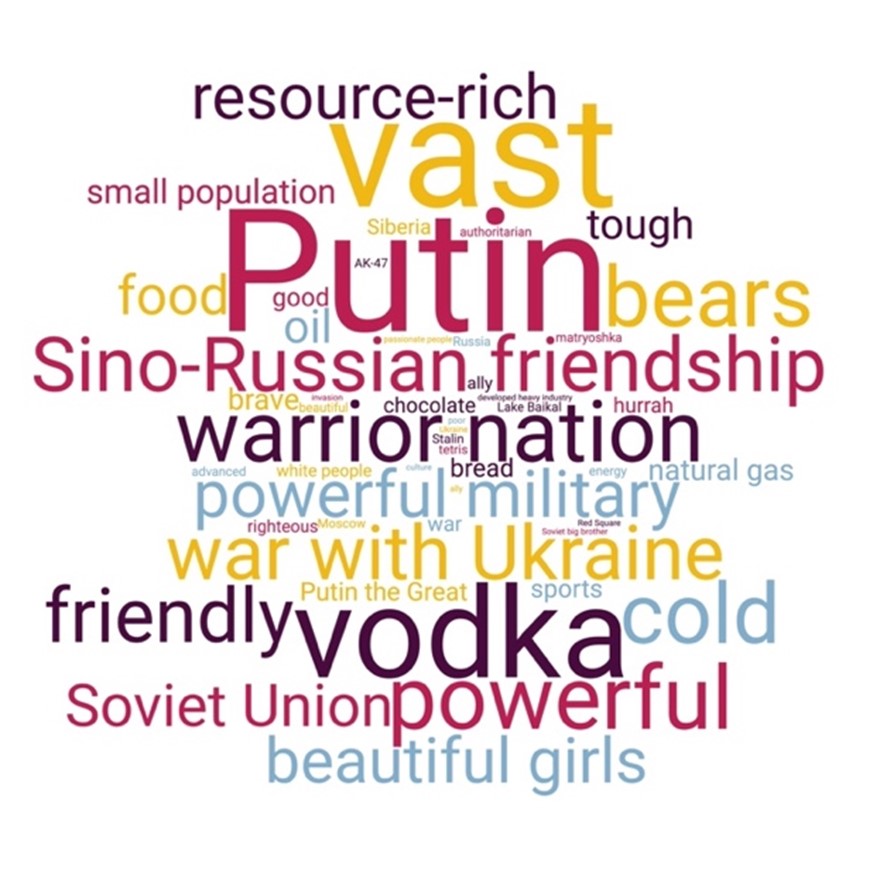 When asked whether their perception of Russia changed in recent years, 80 percent of the respondents said it got better, for 6 percent it worsened, and for 14 percent it remained neutral. Respondents whose perception of Russia got better mentioned the strength of the country, the strength of the leadership (“trust Putin,” “Putin has guts,” “strong leadership”), and trustworthiness and friendliness toward China (even “brotherly love” between Russia and China, but also mentions that the “enemy of an enemy is our friend”). Respondents also mentioned economic development and military strength, with the term “warrior nation” often used in a positive sense (“famous warrior nation”). A few answers referred to the admiration of beautiful women and sportspeople (mostly skaters) and a good life in general. There were, however, also a few respondents who did not know the reason for why they felt their impression of Russia got better and wrote “just a feeling.” Those few who said their opinion of Russia changed for the worse said the economy was bad or in decline, or mentioned wars, and specifically the war with Ukraine, and invading other countries.

Regarding Europe, Chinese respondents did not have robust associations but rather many smaller ones – and some people did not provide any associations whatsoever (24 out of 500). Europe is seen as white (“Caucasians”), wealthy, developed in all kinds of ways – economy, technology, culture – and as an exciting travel destination with rich culture and history. Also, Europe is recognized as strongly connected to the institution of the European Union (“EU”) and the common currency (“Euro”), while also connected to “NATO” and a “US ally” (which is most likely seen in negative terms). The three most mentioned countries were France, Italy, and Germany. Europe is considered to be “romantic” and a place for “fashion” and “luxury goods.” 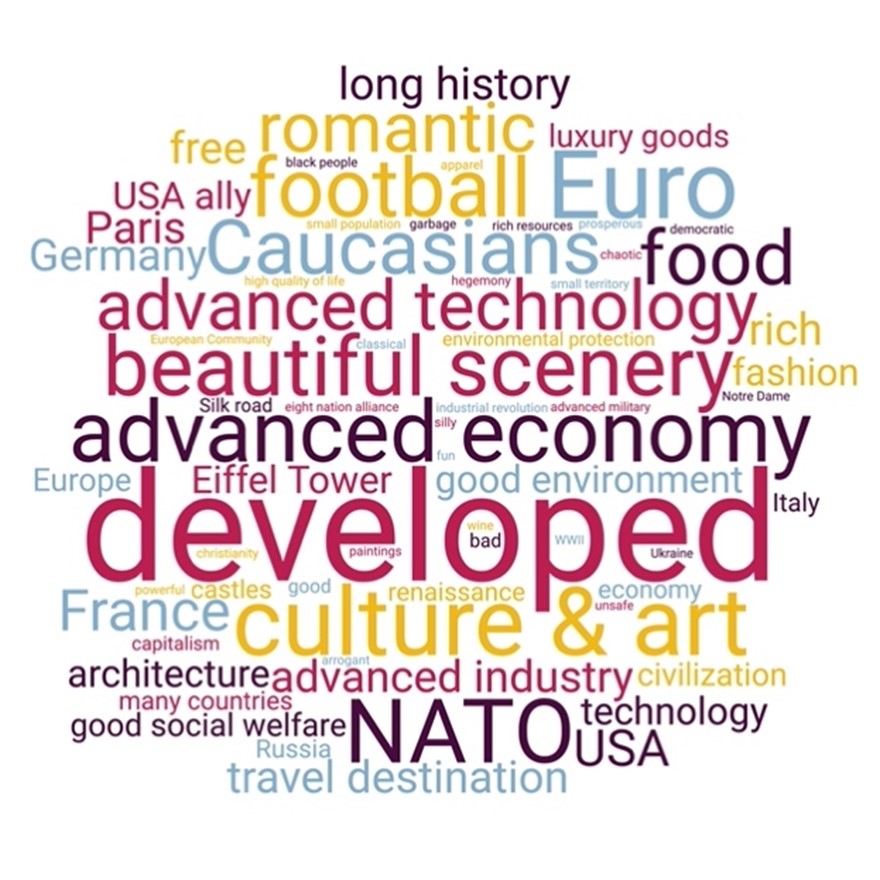 When asked whether people’s perception of Europe has changed in recent years, 25 percent of the respondents remained neutral, while 30 percent said it has worsened, and for 45 percent, it got better. Some reasons for the worsened perception include the deteriorated EU-China relations: issues of sanctions and the idea that Europe lacks strategic autonomy – being a “follower of the US to suppress China” were repeatedly raised. Russia’s war on Ukraine also made Europe’s image more negative among respondents. On the other hand, those with a positive perception of Europe often mentioned the stable and sound economic development, advanced technology, and good quality of life.

The Chinese respondents’ image of Africa is very general and mainly relates to sub-Saharan Africa (thus ignoring North Africa): hot, vast savannah with wild animals roaming; the continent has “pristine nature” and is rich in “natural resources.” The first and foremost association is, however, “poverty,” followed by “Black people.” High up on the scale were also “backwardness” and “economic backwardness.” People also seem to be aware of “Chinese aid to Africa.” Other than that, African people are seen by the Chinese as “friendly” although “lazy.” 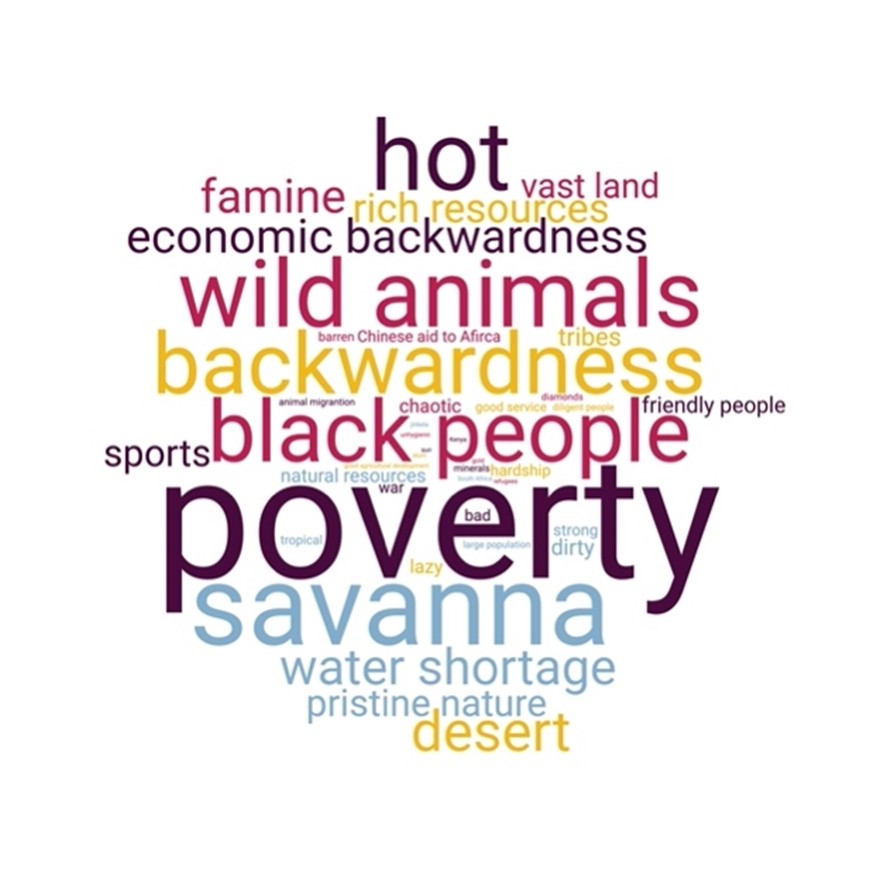 When asked whether people’s perception of Africa has changed in recent years, more than half of the respondents (53 percent) showed positive change. While 33 percent remained neutral, only 14 percent have a worsened view of Africa. Many of the respondents who hold positive views mentioned the improved relations with China and the fact that the development of Africa is going in a fast and positive direction – especially with aid from and cooperation with China. The negative perceptions of Africa mainly focus on the idea that Africa is poor and backward; some mentioned that they saw on social media an underdeveloped situation there and therefore had a bad impression. Despite largely self-reported positive views, the strong influence of certain stereotypes can also be observed with answers like “African people are lazy.”

When asked about Japan, the most common associations tend to focus on historical grievances, such as “invasion of China,” “Nanjing massacre,” “resistance war against Japan,” or “cruel history.” This shows that the unpleasant memory of the war between the two countries remains in the collective memory of the Chinese people and defines the current view of Japan. Besides highly negative terms such as “Japanese devils,” Japan is also seen as a technological and industrial powerhouse with a developed economy. 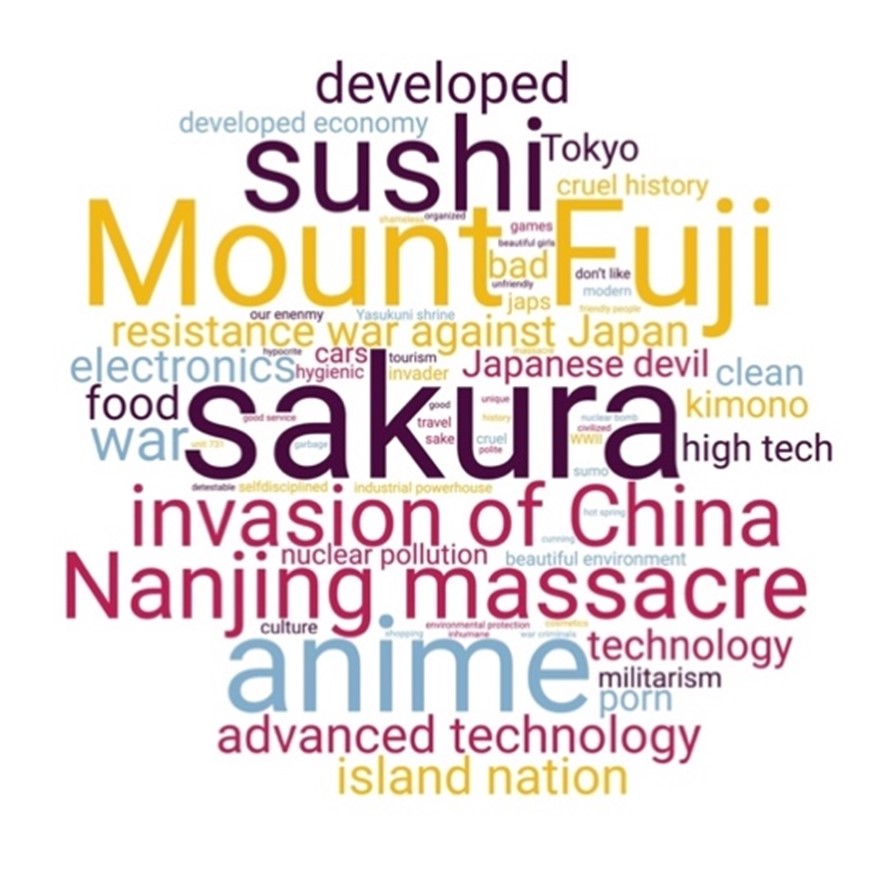 When asked whether people’s perception of Japan has changed in recent years, 28 percent of the respondents remained neutral, and both those with positive and negative changes are at 36 percent. The positive attitudes are related to Japan’s advanced technology, good environment, the etiquette of the Japanese people, and Japan as a desirable travel destination. Reasons for negative attitudes vary and are usually political – historical trauma, territorial disputes (Diaoyu/Senkaku Islands), Japan-US alliance, and anti-China sentiments from the Japanese far-right political scene. The problem of nuclear waste water can also be seen in the responses.

Chinese people’s most common association with Singapore was that it is a place where “ethnic Chinese” live and many people speak “Chinese.” Nevertheless, this was the country/entity with the highest rate of people not having any association whatsoever (31 out of 500) out of the six we explored in the poll. So while Singapore is seen as a “travel destination” that is “clean” and “beautiful,” with many gardens and greenery and is symbolized by the “Merlion,” Chinese people don’t seem to have deep knowledge of Singapore. Nevertheless, there is interest in the country and a sense of looking up to Singapore’s strong points – “good governance,” “organized,” “safe,” and having a “clean environment” were frequent descriptors, as well as awareness of “strict laws.” Singapore is seen as “wealthy” and considered friendly towards China. 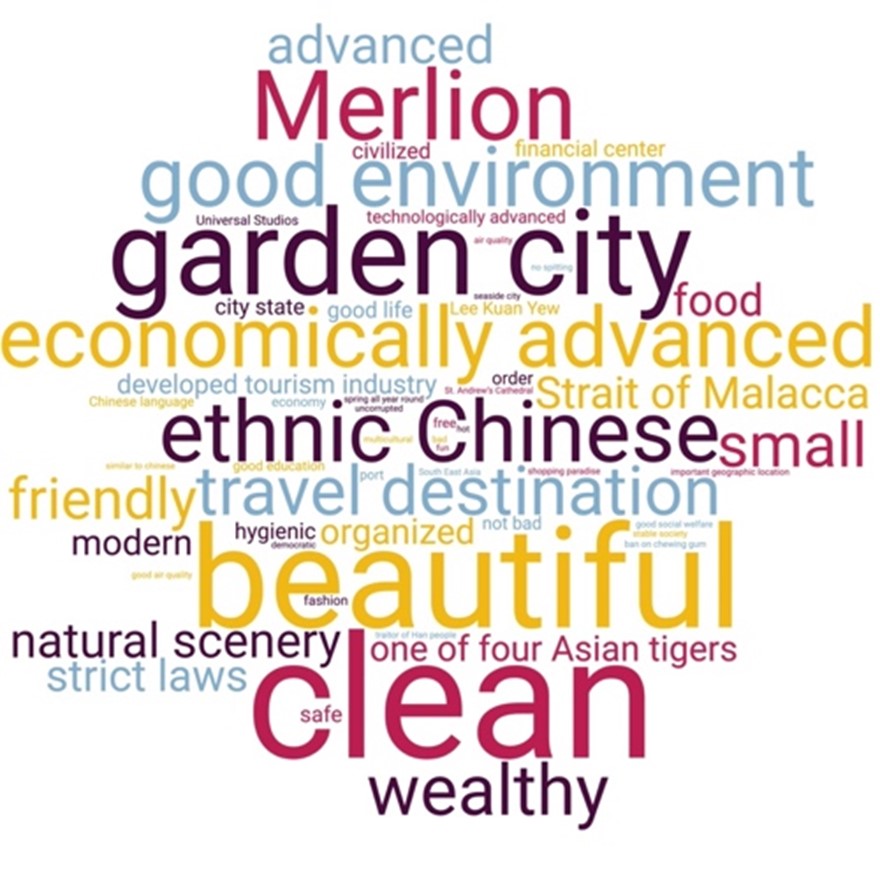 When asked whether their perception of Singapore has changed in recent years, the majority (64 percent) of the respondents responded positively, while 29 percent remained neutral, and only 7 percent responded negatively. Aside from an overall excellent performance such as good governance, clean environment, and well-developed economy, some respondents see Singapore positively because they share the same ethnicity as the Chinese and Singapore is seen as friendly towards China. On the other hand, although a small minority, those who view Singapore negatively overwhelmingly mentioned “anti-China attitude” and that Singapore is becoming increasingly unfriendly towards China. Some mentioned sanctions.

To save the planet, follow the Gulf’s lead on nuclear power

Who is Profiting From Our Nation’s Infrastructure? – Byline Times