China’s 2018 National Sword Policy ended the country’s role as the recycling bin for the world’s post-consumer plastic scrap and threw global recycling markets into disarray. Reeling on the other side of the globe, American cities were forced to store, incinerate, or throw collected recyclables into landfills. Faced with a rapidly diminishing landfill capacity, China is consolidating and formalizing its domestic recycling industry, an expensive and daunting task.

Cities around the world are struggling with the costs and logistics of collecting and sorting their plastic waste. Less than 15 percent of plastic produced worldwide is actually recycled, due in part to low oil prices that make virgin plastic much cheaper than recycled pellets. The Pew Charitable TrustsBreaking the Plastic Wave report estimates that without decreases in plastic production and increases in recycling, by 2040 plastic pollution entering the ocean will triple from 11 to 29 million metric tons each year.

With the global recycling economy in disarray, the United States, China, and countries around the world must quickly rethink and reboot waste infrastructure and financing to handle their single-use plastic waste. One solution—extended producer responsibility (EPR)—rethinks product waste management altogether. Based on the polluter pays principle, EPR legislation makes plastic producers and brand owners responsible for the end-of-life management of their plastic packaging.

An effective EPR law improves recycling outcomes and incentivizes the innovation of less resource-intensive products. Most charts developed to explain multi-stakeholder EPR systems use arrows to represent the flow of financing and shared responsibility. A simpler way is to imagine it like a restaurant where the head chefs are the EPR legislation that sets a menu of regulations for the wait staff to carry out (pun alert!). The troika of wait staff includes: 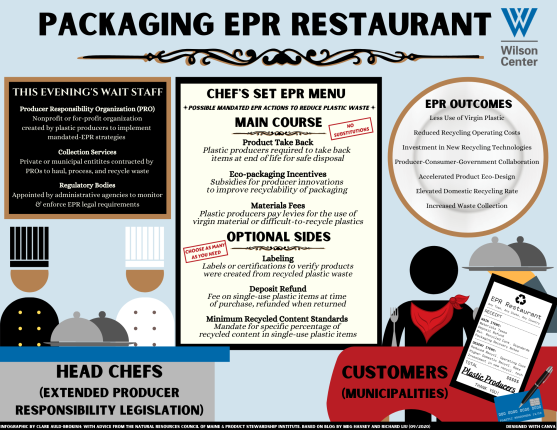 EPR for packaging policy as a restaurant. Infographic by Clare Auld-Brokish.

A Menu for Plastic Waste Regulation

While governments view EPR legislation as a silver bullet for plastic waste reduction, these systems take time to develop. For decades, companies in the United States, Europe, and China have supported EPR systems that expand recycling of mattresses, vehicle scrap metal, and electronics waste. Plastic waste, an abundant and significantly less profitable resource, is the next frontier for EPR laws and company innovation.

Germany and Japan were early adopters of EPR for plastic packaging in the 1990s and now lead the world with some of the longest running public-private collaborations for recycling. In 1991, Germany introduced the Green Dot system which mandated companies to finance the collection, sorting, and recovery of all recyclable packaging waste. Under this system, a green dot on product packaging shows consumers that companies are complying with EPR requirements. Green Dot raised Germany’s recycling rates from 3 percent in 1991 to 65 percent today and formed the foundation of EPR policy in 29 European countries, along with Israel, Turkey, and the European Union.

In the decade following its national 1995 Packaging Recycling Act, Japanese producers developed an industry-led EPR system that increased packaging waste collection from households. Recycling and landfill-diversion systems established by the Act took a decade to become profitable and even then, municipalities were still footing much of the bill for waste management. Thus, Japanese policymakers included a 2006 provision to mandate greater producer-financed municipal collection.

Like many countries, Germany and Japan struggle to manage increasing volumes of flimsy, low-value plastic. Per capita, Japan ranks second to the United States in consumption of single-use plastics. While the country collects between 70-90 percent of the 9 million tons of plastic waste generated each year, Greenpeace campaigner Hiroaki Odachi explained at a recent Wilson Center meeting that 56 percent is incinerated. Of the portion recycled, only 10 percent is handled domestically and almost twice as much is shipped overseas. Last year, Japan and Germany ranked with the United States among the largest exporters of plastic waste to Malaysia. Odachi stressed poor waste management in Malaysia and end countries that increases the likelihood it up in the ocean.

Cooking Up EPR in the United States and China

Following early examples set by Maine, Vermont, and California, state-level EPR for packaging legislation is gaining traction in the United States, and according to Scott Cassel, CEO and founder of the Product Stewardship Institute, many more states are set to introduce EPR Bills in 2021. Buoyed by this state-level action and with bipartisan support, Congress passed the Save our Seas 2.0 Act that aims to reduce, remove, and prevent plastic waste leakages into waterways by funding clean up efforts and investing in recycling. Congress is also considering a collection of plastic waste related bills, including the RECYCLE Act to fortify recycling infrastructure and the RECOVER Act to invest more heavily in waste collection. Only one proposed bill—the Break Free from Plastics Pollution Act of 2020—places EPR for packaging as its centerpiece.

The success of EPR pilot projects in 2015 for electronics waste led China’s State Council to include plans for more robust EPR legislation in its 13th Five Year Plan for waste management. Ambitiously, this plan states by 2025 China will recycle at least half of all waste products, increase eco-design, and incorporate renewable and biodegradable materials into electronics and drink packaging. China’s Solid Waste Law amendments and State Council Guidance documents issued in 2019 also lay out plans to establish other sector-specific EPR schemes.

In December 2020, China’s National Development and Reform Commission issued the first detailed national EPR implementation plan targeting paper-based composite beverage packaging, a type of product whose layers make it difficult to recycle. The plan pushes large packaging and beverage producers to reach a 40 percent recycling or reuse rate by 2025 and is likely a pilot for more plastic recycling mandates in the near future.

EPR laws offer a promising tool for solving the global plastic pollution problem by shifting the bill for recycling from cities and individual consumers to producers, and encouraging product design that reduces plastic content.

As two of the largest consumers of single-use plastics, the United States and China could lead major changes in the global plastic production and recycling industry if they follow the EPR for packaging example set by the European Union. To do this, the United States must successfully transition from state to national EPR policies, while China must build out its sorting, collection, and recycling infrastructure and continue expanding EPR policies that incentivize companies to design recyclable packaging.

Meg Hassey is a doctoral student in Global Governance and Human Security and a research associate with the Center for Governance and Sustainability at the University of Massachusetts Boston’s John C McCormack Graduate School of Policy and Global Studies. Her research explores the intersections of global plastic governance and environmental justice.

Clare Auld-Brokish is a research assistant at the Wilson Center’s China Environment Forum where she is working on urban water issues in China and global plastic waste. She recently returned from a Fulbright fellowship in Yunnan, China where she conducted environmental science research on freshwater lakes and constructed wetlands.

Richard Liu was a China Environment Forum research intern in the fall of 2019 and a research intern with the Wilson Center’s Serious Games Initiative in the summer of 2020. He studies economics at Indiana University.

Do you SEA it? Brain Teaser challenges you to find the jellyfish among the plastic