Earlier this year, the Indonesian parliament passed a bill to relocate the country’s capital city from Jakarta to the East Kalimantan province in the island of Borneo to level out overpopulation. The new capital will be constructed as a smart city.

“(I) hope to have Hyundai Motor Group as a partner providing important solutions such as clean mobility to Indonesia’s new administrative city construction project,” Widodo was quoted as saying by Hyundai officials who attended the meeting.

In response, Hyundai Motor Group Chairman Chung Euisun said: “We hope to expand the collaboration with Indonesia, stretching from eco-friendly business to the future mobility sector.”

The two were meeting for the third time. In April, Chung visited the Southeast Asian country to participate in an opening ceremony of the carmaker’s manufacturing plant there.

The carmaker invested 2.2 trillion won ($1.6 billion) in the plant, located in Deltamas industrial complex, 40 kilometers east of Jakarta. It is capable of producing 250,000 units a year and is the carmaker’s first plant to produce electric vehicles, including the Ioniq 5, in Southeast Asia.

Indonesia aims to become a major EV production and export hub by 2030, and has been offering incentives and benefits for investment by foreign EV makers. 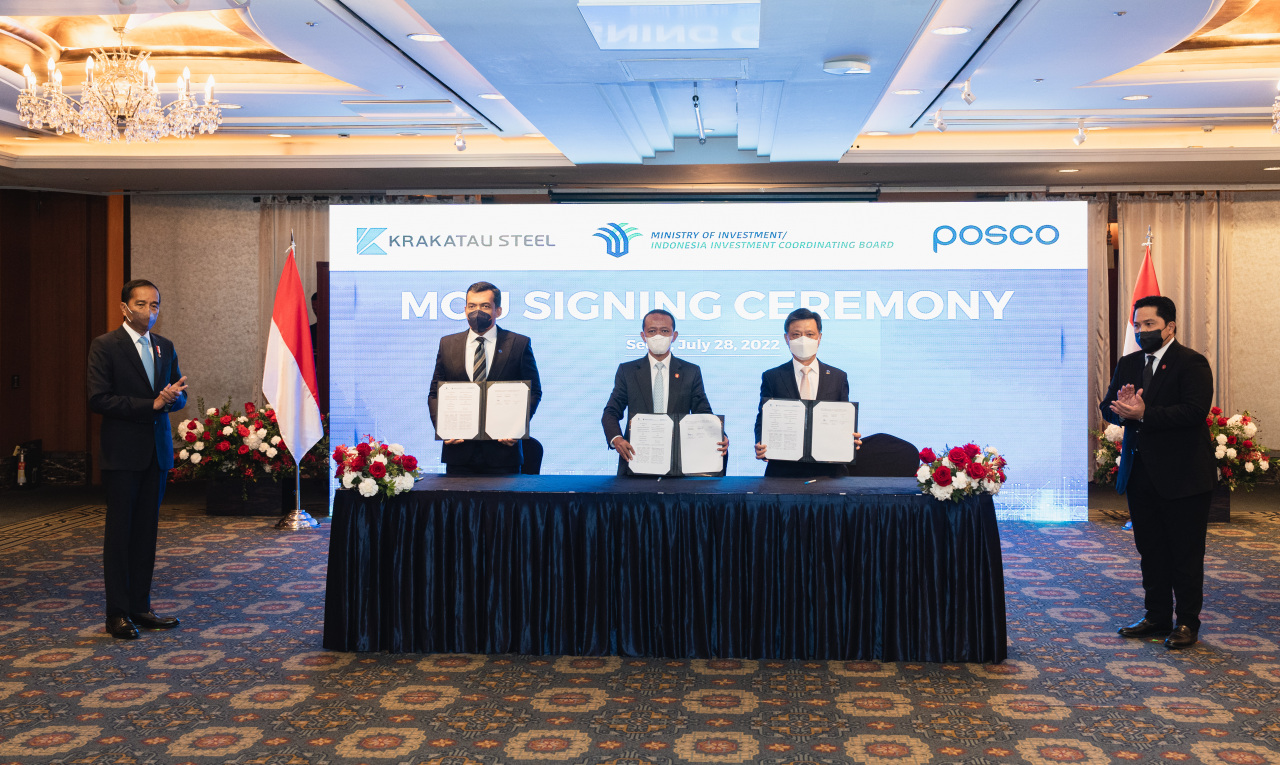 Marking Widodo’s visit to Seoul, South Korean steelmaker Posco said it had clinched an agreement with its joint venture partner PT Krakatau Steel to cooperate in establishing a second furnace and manufacturing facility for cold-rolled steel production at an Indonesian plant. According to the deal, the companies agreed to invest 4.6 trillion won by 2026 to the PT Krakkatau-Posco joint venture. The new furnace will increase the annual crude steel production volume to above 6 million tons, the company said. The signing ceremony was attended by Widodo.

President Widodo is on the third leg of an East Asia tour. He arrived in Seoul late Wednesday, for his first visit in three years after attending the 30th Association of Southeast Asian Nations-Republic of Korea Commemorative Summit in Busan. The Republic of Korea is South Korea’s official name.

Posco said the Indonesian government will offer tax breaks and incentives for participating in the country’s new capital construction project, based on its experience of developing the smart city of Songdo in Incheon.

On the sidelines of the meeting, LS Group clinched an agreement with Indonesia’s state-run electricity supplier Perusahaan Listrik Negara to collaborate on electricity infrastructure development and boost technical support in electricity cables, devices and system sectors.